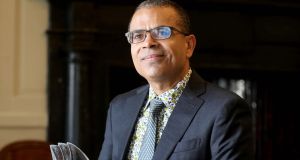 Akhil Sharma has been announced as the winner of the 2016 International Dublin Literary Award. Photograph: Jason Clarke

A second novel, which cost its author years of hardship and emotional stress to write, is the winner of this year’s International Dublin Literary Award, out of an initial 160 nominations.

Indian American Akhil Sharma’s Family Life, an autobiographical account of the tragedy which devastated his parents and left him adrift throughout his childhood, was announced as the 21st winner of the €100,000 prize.

Although Family Life had also won the Folio Prize last year, Sharma’s win is unexpected considering the popular support for Marlon James’s brashly obvious 2015 Man Booker winner, A Brief History of Seven Killings and the magisterial presence on the short list of Marilynne Robinson with her acclaimed Lila.

However most surprising of all, is the overlooking of German writer Jenny Erpenbeck’s profound and moving five variations of one woman’s potential life unlived, The End of Days, translated by Susan Bernofsky. Another superb contender was Brazilian Michel Laub’s Diary of The Fall, translated by Margaret Jull Costa.

Family Life tells the story of Sharma’s family and its journey from Delhi to a new life in the United States. It is told from the perspective of Ajay, the younger son. Initially the accountant father sets off in 1978 and he does seem as an unlikely scout in the forging of an adventure: “His wish had been born out of self-loathing.” Yet it is he, long convinced of the glamour of the West, who establishes roots, renting an apartment “in a place called Queens”. His wife and two sons followed a year later. All is well and Sharma quickly reveals the humour which counters the grief.

The brothers have each other. But it is clear that Birju, the elder by four years is something of a star in the making and is clearly his mother’s favourite. The narrator quickly falls in love with television and the women who grace it. “I decided that when I was married, I would be very serious, and my silence would lead to misunderstandings between me and my wife. We would have a fight and later make up and kiss. She would be wearing a blue swimsuit as we kissed.” Ajay has an active imagination and notices how quickly his brother begins to shine in America. Meanwhile, Ajay experiences bullying at school and his father intervenes.

All is well with young Ajay discovering books and happy to vanish into them. One day, soon after Birju has won a place in the Bronx High School of Science, he suffers a freak accident while swimming. Ajay’s initial reaction is characteristic: “I wondered whether Birju had stepped on a nail. I wondered if he was dead. This last was thrilling. If he was dead, I would get to be the only son……I imagined Birju getting to be in the hospital while I had just another ordinary day.”

But there is no minor hospital adventure for Birju. He has suffered catastrophic head injuries and is confined to death-in-life.

The narrative recalls the contrasting effect the tragedy has on the parents; the father retreats into alcoholism while the mother battles on, devoting her days to tending her son and listening to every crackpot offering a sure-fire cure.

For all the deceptive simplicity of the prose and the style intended to convey the sense of a younger child’s aware of being apparently being overshadowed by a sibling’s misfortune, Family Life is as demanding as might be expected. Sharma balances the candour and realism with humour.

In several ways it proves to be the difficult second novel. It was draining to write because of the subject, his brother’s ruined life – Anup Sharma did not die until 2012 after three decades of suspended animation – Family Life which took almost 13 years to write. But it also followed Sharma’s impressive debut, An Obedient Father (2000), a stronger novel, which is a dark if at times comic, heavily-plotted narrative about personal and public corruption in Delhi.

Sharma (44) becomes the third American – he considers himself American – to win the award: Edward P. Jones won in 2005 with The Known World and Michael Thomas won four years later with Man Gone Down.

Last month saw the first awarding of the revamped Man Booker International won by the South Korean Han Kang. Her novel, The Vegetarian, was translated by Deborah Smith. It received overwhelmingly critical praise, similar to that given to that given to Erpenbeck’s The End of Days. The Man Booker International is exclusively celebrating literature in translation. The £50,000 prize money is shared equally by writer and translator.

The International Dublin Literary Award, has since its inception, been a tremendous champion of international fiction in translation, yet this may now be challenged as Dublin judging panels have moved increasingly towards English-language, often already high profile, titles. In the case of a translated winner, €100,000 prize is divided with €75,000 to the author and €25,000 to the translator.

Aside from the question of the prominence or dwindling prominence, of books in translation, there is also the dearth of female winners. To date the International Dublin Literary Award has had only two women winners: Romania Herta Muller for The Land of Green Plums in 1998; and Britain’s Nicola Barker for Wide Open in 2000.

Akhil Sharma, a former investment banker, working as he says, “just off Wall Street” possesses a quiet, deliberately understated literary voice. Candid and unafraid to tackle dark subject matter, An Obedient Father revolves upon a sordid instance of paternal sex abuse among the several forms of corruption explored in that novel. He is a disciplined storyteller. Sharma relies on humour, a precise feel for language and the always beguiling randomness of memory.

Even so it is intriguing that this likeable, very human novel, held off the challenge not only of Erpenbeck, as well as Laub, but also of Robinson and the Rwandian Scholastique Mukasonga with her exuberant Our Lady of the Nile, translated by Melanie Mauthner. It would have been most satisfying to see a novel in translation win, or a novel by a woman, or perhaps most exciting of all, a novel in translation by a woman. The International Dublin Literary Award has made a special contribution to literature and to readers, the new look Man Booker International could encroach upon a unique role.