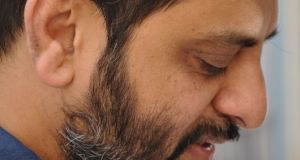 Literary perfection is elusive, yet it is possible, as Vivek Shanbhag demonstrates in his magnificent novella, where comedy is undercut by seething menace and overwhelming regret at a failure to act decently.

It is obvious how much he relies on the place, dominated as it is by the astute Vincent, the waiter of whom the narrator reflects: “I suspect he knows the regulars at Coffee House better than they know themselves.”

Something appalling may have happened. A sense of dread has unsettled the narrator: he wants to speak with Vincent, even confide. While he sits and waits in the cafe, aware he has never before lingered so long, a story begins to take shape in his mind.

At another table is a girl, whom he has often observed as she waits for a young man. This time there is an argument and she throws a glass of water at her companion. She misses.

The scene causes the narrator to remember another young woman, strong-willed and determined. Her name was Chitra and her conversation resounded with details of the cases she happened upon through working for a woman’s welfare organisation.

The last time the narrator had met her she mentioned a wife who had been driven from her home in the middle of the night by her mother-in-law. Chitra’s outrage sparks something in the mind of the passive, lazy narrator. From then on, he goes to the cafe at a different time, to avoid her. Meanwhile his family have arranged a marriage for him with Anita, a beautiful girl, who, ironically, also turns out to have a dangerous sense of justice. “How did I slip into this way of life?” asks the narrator.

Shanbhag, the author of three novels, five collections of short stories and two plays, is a major figure in contemporary Indian literature. He writes in the South Indian language of Kannada and has an inspired feel for characterisation and dialogue. This is his first work to appear in English.

It is brilliantly translated by his fellow Indian Srinath Perur, who has convincingly conveyed the tone, which for Shanbhag “is the most important thing in translation”. It is a nuanced wonder with echoes of another South Indian master, the great R K Narayan. Also evident is the influence of Chekhov and the Brazilian Machado De Assis, while the narrator is reminiscent of the hapless Everyman anti-hero of Ivan Goncharov’s 19th century Russian classic, Oblomov.

As the narrator recalls how his family unexpectedly began to thrive after his father, having been faced with redundancy, began to work with his brother, the sheer ruthlessness of the clan begins to emerge. His childhood home had been a miserable place in which his mother waged war on armies of marauding ants.

No tenderness or sisterhood are forthcoming from the narrator’s newly rich mother and his divorced, unstable sister, as they denounce a woman who calls to the house asking to see the narrator’s uncle, a bachelor, who runs the family business. The stranger, possibly a lover, bears a gift that is brutally rejected.

Anita’s candour sets her at odds with the family. The narrator can only speculate.

Taking its title from a phrase invented to describe chaos, Ghachar Ghochar may well be one of the finest literary works you will ever encounter.