Francis Bacon: ‘Sex and painting: that was his life’ 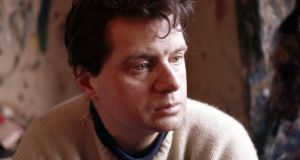 Francis Bacon in his studio, circa 1960. Photograph: Popperfoto/Getty Images 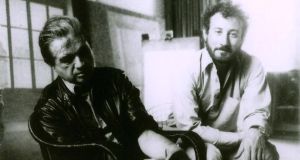 In the Hugh Lane Gallery, on Parnell Square in Dublin, Michael Peppiatt is reading from his new memoir, Francis Bacon in Your Blood, which details his 30-year friendship with the painter.

The art critic, who is naturally theatrical, delights his audience with his impersonations, bringing to life the camp bitchiness of Bacon and the rough and readiness of Bacon’s young East End muse, George Dyer.

Down the corridor Bacon’s studio lies dormant in a climate-controlled room, its meticulously catalogued chaos trapped behind glass. With torn pages, unfinished canvases, and brushes propped in tilted jars, it bears a Mary Celeste look of startled abandonment.

Peppiatt is unsure about the studio’s relocation, given that Bacon left Ireland at 16 and never looked back.

“I think it would’ve been more normal for it to stay where it was,” he says, referring to Bacon’s home in South Kensington, in London. “Because that’s where he lived and that’s where he had his whole professional life.”

The pair met in 1963, when a 21-year-old Peppiatt walked into a dank Soho bar looking for an interview with Bacon for a college magazine. He had not yet seen Bacon’s work.

“Probably, if I had seen them, I wouldn’t have gone along to that meeting, because I was very disturbed when I did. But by that time I had already been charmed by his exuberant personality and the whole freedom that he exuded.”

Peppiatt quickly became a confidante of the flamboyant “Soho hero”, who was 54 when they met. As part of Bacon’s inner circle, alongside Lucian Freud and John Deakin, Peppiatt rollicked through the glamour and gutter of the underground clubs and decadent restaurants of London and Paris, keeping detailed notes despite his throbbing hangovers.

He describes Bacon as a “romantic figure” and “swashbuckling”, a man who “tended to befriend rather lost young men. With some artists you meet you might like their work, but they don’t have an effect on you. There it was the man and the work and the life he made. So that was a triple force.”

Bacon provided something lacking from Peppiatt’s own life, a father figure (“a strange father to choose”).

His father was manic-depressive, and moving into Bacon’s extraordinary shadow was a comforting distraction. “I would immediately get terribly uncomfortable if the conversation turned to my family or my background. I felt sort of embarrassed. The family life was loveless, so I wanted out as soon as I could, and that was the big missing element. So there we are. I think it’s partly my fault. I think I was a very difficult child. Very, very demanding. Perhaps I wanted affection and I didn’t get it.”

Just as Peppiatt’s family had watched for swings in his father’s mood, so it was with Bacon, whose garrulousness could turn sour in a heartbeat.

“You needed to watch out, because you could be on a perfectly upwards swing, and then a glass too many, and suddenly it would all shift. I adored him, so if he turned against me I felt very vulnerable.”

Their relationship was platonic. Peppiatt describes how he once kissed Bacon on the cheek simply because “I felt such affection when I was leaving him”. Then “I felt him tense up, his cheek bristled and I don’t know what it was, whether it was a danger signal, whether it was sort of saying, ‘Don’t even bother, I know that’s as far as it’s going to go.’ I thought, That’s off limits.”

Bacon’s generosity was reckless and may have been intended to create a feeling of indebtedness in the receiver. “He was very controlling. It’s that thing of being one thing and the other. It meant he was on a tightrope the whole time.”

There is a remarkable scene in the book when Peppiatt tells Bacon that he and his wife are expecting a baby and Bacon reacts with pure rage.

“Isn’t that odd? But I’ve talked about it with gay friends of mine, and they say that he was in love with me and that he felt he was losing me because of that.”

The relationship was “very, very intense. Some people say that it destroyed me. I think it made me.”

George Dyer, Bacon’s most famous lover and muse, was another of the young men burned by Bacon’s dark influence – fatally so. Peppiatt describes him as a “lost soul” from the East End “drawn into this thing because it gave him a role to play. He was suddenly someone, whereas he had been an unsuccessful petty crook.”

Bacon was darkly masochistic, leaving his friends at the end of long nights of drinking to go on to seedier pubs, wearing showy jewellery to attract the negative attention he desired.

“I was probably quite relieved not to have seen the kind of extreme . . . Obviously, I wasn’t present when [Bacon] was getting beaten up, but if that’s in fact what happened, I think that’s what he wanted, and one of the problems with George is that he was too nice to provide the sadistic treatment.”

Dyer became an outlet for Bacon’s own sadistic instincts. Bacon’s savage goading and subsequent guilt inspired his deformed depictions of Dyer on canvas, which Dyer hated. “He just thought what a crazy world it was that people were paying all that money for what he considered dreadful daubs.”

Dyer took his own life on the eve of Bacon’s retrospective at the Grand Palais, in Paris, in 1971. Peppiatt was in the city the night Dyer died. “It didn’t occur to me that there would be a tragedy. He had told me that he attempted suicide, but it’s a bit like watching a film – you think, That’s over there.”

According to Peppiatt, Bacon liked people who stood up for themselves. “And that’s really what happened with poor George. Although he sort of had bulging muscles and, if really pushed, could be quite decisive in a fight, temperamentally, he didn’t stand his ground.”

Despite the drinking and excess, Bacon remained prolific. “Francis was such a motor I don’t know how he managed to physically go from day to day. It was like all this punishment . . . He was very tough. He’d go through all sorts of really tough things: being beaten up, having swamped himself with drink, and everyone around him. He would go on after a very boozy lunch to a boozy afternoon. I was often with him, so I saw it. He would continue when you left him at 3am or 4am.”

Was Bacon’s behaviour driven by self-loathing? “There are a couple of things. A simpler one is that I think he was guilty about his homosexuality. And I think he took all this punishment as a kind of atonement. He felt absolved through the pain.”

But then, as always with Bacon, there is an equal but opposite explanation. “There was also a kind of huge arrogance and superiority that . . . the masochist, if he outlasts the punishment, is the one who wins.”

Both in art and in life, Bacon believed that “only by going too far do you go anywhere at all. Very few stayed the pace. He exhausted people.”

Despite the constant pushing of boundaries and the bleak nature of his work, Bacon was “very much a life force. He played with death and went very close to that, but he regularly said, ‘Life is all we’ve got.’ ”

Ageing, however, did take its toll on his extravagant heart. “I think he loathed the idea of growing old. He went on wanting to seduce and went on desiring. He said, ‘It’s tragic at my age to desire.’ And I think that’s one of the things that kept him going. Sex and painting: that was his life.

“I still believe that’s the key. When he said, ‘In painting I want to re-create the excitement of life,’ well, what is, in a sense, more exciting than having sex? That’s it, isn’t it? You can’t get excited by landscapes or paintings or political events. But it’s the ultimate. It’s an orgasmic activity, his painting.”

While the memoir is candid, it is also kind to Bacon. There is always a search for understanding. “Yes. Because I loved him: with huge reservations and very conditionally.”

Peppiatt describes one of the last times he saw Bacon before his death. “I think in old age the contradictions became resolved. Perhaps with this last, very good-looking boy he found a contentment. Also – he had been called the greatest living painter, he had all the accolades, the money – he looked positively cherubic.”

And although Bacon’s later art suffered from that lack of turmoil, “it’s interesting that he resolved it in his life work. So it’s a complete trajectory. Whatever was warring was now at peace.”

Francis Bacon in Your Blood is published by Bloomsbury Circus