Review: Christopher Frayling’s new book is a welcome extension of the work that Edward Said began with his seminal ‘Orientalism’ 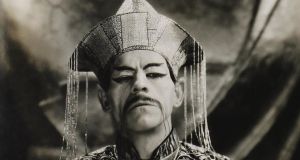 Yellow peril?: Boris Karloff in The Mask of Fu Manchu, from 1932

Book Title:
The Yellow Peril Dr Fu Manchu and the Rise of Chinaphobia

Christopher Frayling’s book on Chinaphobia is a welcome extension of the work that the Palestinian writer Edward Said initiated with his seminal Orientalism in 1978.

Focusing on Arab culture, Said outlined the systematic distinction between Orient and Occident and the way it had functioned as a mode of colonialist control. Frayling’s The Yellow Peril analyses the fabrication and imposition of an imperial narrative set farther east and projected on to Asia.

Stretching from the 19th century to the present, Frayling finds his starting points in the exotic description of opium dens around Limehouse (part of the London docklands), in the writing of Dickens (his last, unfinished novel, Edwin Drood), Conan Doyle and Oscar Wilde’s The Picture of Dorian Gray.

Frayling extends his investigative lens to a wide range of popular culture, to films and books, advertisements and songs. He traces the elements through music halls and popular ballads to the central figure of Dr Fu Manchu, created by Sax Rohmer, the nom de plume of the Irish writer Arthur Henry Ward.

Born of Irish Catholic parents in Birmingham in 1883, Ward built his persona writing for music-hall performers while working as a journalist and occasionally delving into the occult. Ward adopted his mittel-European-sounding pen name at exactly the moment when his literary compatriots were engaged in the Celtic revival.

Frayling also notes that, apart from Rohmer, a succession of writers with Irish connections played key roles in the saga of Chinaphobia from the 1870s, from MP Shiel’s The Yellow Danger to Standish O’Grady’s vision of an Asiatic empire in Under the Tyranny (1900). When Rohmer’s books were banned in Germany in 1936 (the Gestapo presumably interpreted his name as Jewish) he protested that he was “a good Irishman” and, astoundingly, that he could not understand this censorship, as “my stories are not inimical to Nazi ideals”.

At this stage Rohmer’s novels and the films based on them have moved into the domain of cult appreciation – fascination and immersion for a defined group. Frayling’s account shifts gears for extensive interviews with Elizabeth Sax Rohmer, the former governor of Hong Kong Chris Patten and the actor Christopher Lee, who offer a close-up sense of individuals with key roles in the story. The author delights in the close detail and textures here, such as Rohmer’s widow’s remark that “Sax was full of Irish charm and old-world chivalry”.

In both novels and films the sinister figure of Fu Manchu projects a repertoire of meanings: inscrutable and fiendish, cunning and merciless, vengeful and cruel, with predilections for arcane tortures, inventive poisons and elaborate executions. And, of course, overlong fingernails.

Naturally, fiction is made more dramatic with the cruellest villains, and it is only entertainment after all. But Rohmer’s concoction of cunning Asian villainy connects with the irrational fears of proliferation and incursion: racist myths often carried by the water imagery of flood, deluge, the tidal waves of immigrants, rivers of blood.

A flexible set of depictions that drew on versions of dynastic China worked in the cold war for the revolutionary version of China; Emperor Fu Manchu was written in 1959 and set in Mao’s China. It can be said to permeate the conduct of the French and American wars in Vietnam.

Frayling doesn’t attempt to set out the changing historical framework around the cultural representations of the Chinese. The orientalism projected on to a foreign culture about which we have little direct knowledge becomes part of the framework of everyday understandings. Popular culture works in a reciprocal dynamic with both “high culture” and political ideology to move and reinforce popular assumptions.

Variable versions of orientalism are part of an astonishingly durable imperial world view, and traces of historic Chinaphobia return in the current phase of geopolitics, where China, close to becoming the world’s biggest economy, is again perceived as a threat. The habits of a command economy are now mobilised for the market when Communist Party officials in business suits represent a version of capitalism without the encumbrances of even rudimentary democracy. As Said wrote in relation to Joseph Conrad’s Heart of Darkness, “the business of empire became the empire of business”.

With a surfeit of unacknowledged irony, the successors of Mao Zedong, faced with the meltdown of late capitalism in the West, have to warn North Americans not to overspend, to look after their old-world economy. Naturally, their concern is that “the United States honour its words, stay a credible nation and ensure the safety of Chinese assets”.

China’s leaders participate in the global cycles whereby their country makes goods for US consumers, which their regime ensures are produced in a low-wage economy, so increasing the profit that the Chinese state will reinvest in the American economy, which is in danger of collapse. There is a full financial interdependency. The US keeps purchasing products that are made in China, and China keeps buying the consequent US debt.

With luck an investigation into the “yellow peril” such as this opens our cultures to more accurate mutual exchange, where we can begin to “consider the world’s diversity and worship it”, in Derek Jarman’s phrase.

In examining the litany of western fantasies, inventions and aversions, Frayling does not attempt to “understand China”. But as Roland Barthes, who wrote the brilliant Empire of Signs about Japan, remarked when visiting China in 1974, “I feel that I won’t be able to shed light on them in the least – just shed light on us by means of them.”

Prof Rod Stoneman is director of the Huston School of Film and Digital Media at NUI Galway. His latest books are Seeing Is Believing: The Politics of the Visual and, with Duncan Petrie, Educating Film-makers: Past, Present and Future