With the Ballymaloe Literary Festival taking place this weekend, here are 20 literary quotations to whet the appetite 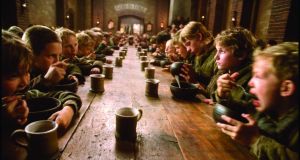 “He rose from the table; and advancing to the master, basin and spoon in hand, said, somewhat alarmed at his own temerity: ‘Please, sir, I want some more.’” Oliver Twist, Charles Dickens

“I will marry you if you promise not to make me eat eggplant.”

Love in the Time of Cholera, Gabriel García Márquez

“And once I had recognised the taste of the crumb of madeleine soaked in her decoction of lime-flowers which my aunt used to give me (although I did not yet know and must long postpone the discovery of why this memory made me so happy) immediately the old grey house upon the street, where her room was, rose up like the scenery of a theatre to attach itself to the little pavilion, opening on to the garden, which had been built out behind it for my parents.”

Remembrance of Things Past, Marcel Proust

“One cannot think well, love well, sleep well, if one has not dined well.”

A Room of One’s Own, Virginia Woolf

“Well loved he garleek, oynons, and eek lekes. And for to drinken strong wyn, reed as blood.”

“I ate another apple pie and ice cream; that’s practically all I ate all the way across the country, I knew it was nutritious.”

On the Road, Jack Kerouac

“If I tell you to eat, you will eat! You wanted cake! You stole cake! And now you’ve got cake! What’s more, you’re going to eat it! You do not leave this platform and nobody leaves this hall until you have eaten the entire cake that is sitting there in front of you! Do I make myself clear, Bogtrotter?”

“He rose from the table; and advancing to the master, basin and spoon in hand, said, somewhat alarmed at his own temerity: ‘Please, sir, I want some more.’”

“Mr Leopold Bloom ate with relish the inner organs of beasts and fowls.”

“At least once a fortnight a corps of caterers came down with several hundred feet of canvas and enough colored lights to make a Christmas tree of Gatsby’s enormous garden. On buffet tables, garnished with glistening hors-d’oeuvre, spiced baked hams crowded against salads of harlequin designs and pastry pigs and turkeys bewitched to a dark gold.”

“It was made of small juicy clams, scarcely bigger than hazel nuts, mixed with pounded ship biscuit, and salted pork cut up into little flakes; the whole enriched with butter, and plentifully seasoned with pepper and salt.”

“Then Homais asked how the accident had come about. Charles answered that she had been taken ill suddenly while she was eating some apricots.”

“Levin ate his oysters, though he would have liked white bread and cheese better.”

“A fat brown goose lay at one end of the table and at the other end, on a bed of creased paper strewn with sprigs of parsley, lay a great ham, stripped of its outer skin and peppered over with crust crumbs, a neat paper frill round its shin and beside this was a round of spiced beef. Between these rival ends ran parallel lines of side-dishes: two little minsters of jelly, red and yellow; a shallow dish full of blocks of blancmange and red jam, a large green leaf-shaped dish with a stalk-shaped handle, on which lay bunches of purple raisins and peeled almonds, a companion dish on which lay a solid rectangle of Smyrna figs, a dish of custard topped with grated nutmeg, a small bowl full of chocolates and sweets wrapped in gold and silver papers and a glass vase in which stood some tall celery stalks.”

“He is the kind of man who breaks biscuits in two and saves the other half for later.”

“Boiled beet greens leaked something cupric, greenish. Capillary action and the thirsty crust of flour drew both liquids under the liver. When the liver was lifted, a faint suction could be heard. The sodden lower crust was unspeakable.”

“Oh, madam, when you put bread and cheese, instead of burnt porridge, into these children’s mouths, you may indeed feed their vile bodies, but you little think how you starve their immortal souls!”

“As I ate the oysters with their strong taste of the sea and their faint metallic taste that the cold white wine washed away, leaving only the sea taste and the succulent texture, and as I drank their cold liquid from each shell and washed it down with the crisp taste of the wine, I lost the empty feeling and began to be happy and to make plans.”

“After a good dinner one can forgive anybody, even one’s own relations.”

A Woman of No Importance, Oscar Wilde

“Then I tackled the avocado and crabmeat salad. Avocados are my favourite fruit. Every Sunday my grandfather used to bring me an avocado pear hidden at the bottom of his briefcase under six soiled shirts and the Sunday comics.”

“Do you think because you are virtuous, that there shall be no more cakes and ale?”

Emily in Paris: If it was Dublin, she’d be shifting Colm Meaney in the Leprechaun Museum
3