On the centenary of the US entry into the First World War, Eileen Battersby revisits William March's stark classic 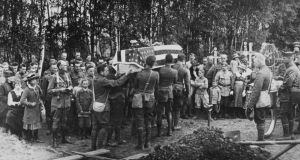 Greeting from Company K: “Dear Madam, Your son, Francis, died needlessly in Belleau Wood . . . At the time of his death he was crawling with vermin and weak from diarrhea.” Photograph: European/FPG/Getty

A soldier, maimed yet alive and returned from the Western Front, recalls the celebrations that greeted his homecoming. The townspeople had “decorated the stores and the streets with bunting; there was a parade in the morning with speeches afterwards”. The toastmaster was the president of the local bank, whose voice “broke with emotion” when he acknowledged the brave warrior’s disfiguring injuries and the incalculable debt of gratitude they all owed him.

War has left him with no illusions. When he visits the banker the next day, to ask for a loan to help him start a chicken farm, his request is declined. There are no heroes in William March’s devastating classic. Company K was published in 1933, four years after Erich Maria Remarque’s All Quiet on the Western Front. Like Remarque, March served in the Great War. Highly decorated, he saw action in France and was involved in every major US engagement there. His experiences left him prey to depression.

Company K is the finest American Great War novel. This republication marks the centenary, on April 6th, of the United States’ entry into the first World War, an involvement that was unpopular in the US. There is far less literature written by Americans about the first World War than the second, which remains as dominant a thematic source for US fiction writers as subsequent conflicts.

Company K and All Quiet on the Western Front were criticised by the US and German authorities for being unpatriotic. Stylistically, they are very different. Remarque’s novel is elegiac, with a plaintive beauty. Paul Bäumer, the young narrator, is an aspiring poet whose response to the horrors he witnesses is bewildered outrage. It is his story, and the book ends with an impersonal announcement of his death, on a day that was “quiet and still”.

March’s prose is plain and effective as he describes daily events through the mainly hardened voices of the 113 men of Company K. It is a daring novel, graphic and thoroughly anti-war. Many of his speakers have become dehumanised. March is interested in the truth, not heroic myth. From the outset it is clear that no one knew what they were getting into. Training, however demanding, conveys no sense of actual war.

Fear, hunger and exhaustion bring out the worst in some of the men. Despicable acts are described, such as the theft of a copper plaque from a kindly old French couple. The plaque commemorates their son, who was killed at the front. When Pte Robert Nalls notices it rolling out of the kit bag of a colleague who had also enjoyed the hospitality of the bereaved parents, he objects, to be told it is none of his business. “I never saw that old couple again,” the private says, “but somehow I wish they knew that I am ashamed of the whole human race.”

Elsewhere, in an almost surreal interlude, an elderly woman from a great house comes down to her gate to thank the soldiers, in French, for their efforts in protecting her country. With her is her little granddaughter. The child has a pet fawn. It becomes drawn to one of the soldiers, and eventually the broken-hearted child gives him her pet. The outcome is obvious yet no less shocking.

A sniper describes how his skills made him “the best rifleman in the regiment”. Patience is vital, “so I would lie there for hours, studying the German line which looked deserted”. Yet he could tell that soldiers were there, because sooner or later a head would appear over the side of the trench.

The speaker delights in recalling his pleasure on being congratulated on his kills. He does not regard them as men; because they were so far away “it didn’t seem like killing anybody . . . I never thought of them as men, but as dolls, and it was hard to believe that anything as small as that could feel pain or sorrow.”

While rummaging through the pockets and knapsack of a dead German – “There was a hole in his chest as big as your fist” – two American soldiers discover half a loaf of pumpernickel bread. Thrilled with their find, they prepare to eat it, only to discover that it’s covered in blood. One of them begins to scrap off the blood, but it has soaked all the way through. He is about to abandon the idea of eating it, but his comrade objects, and they share it.

It is as if the soldiers in Company K become feral. One describes smashing a man’s face with a rifle butt. There are rare tremors of remorse. A soldier happens upon a wounded man who, although badly injured, reaches inside his coat. “I thought he was going to throw a grenade, so I emptied my pistol into him.” There was no hand grenade, only a photograph of a little girl. “That must have been his daughter.”

Survival is down to chance, but an element of cunning also helps; one soldier fakes blindness; another recalls how his school French falsely earned him a role as an interpreter. Entrusted with writing letters of condolence to loved ones back home, one soldier decides to tell the truth: “Dear Madam, Your son, Francis, died needlessly in Belleau Wood . . . at the time of his death he was crawling with vermin and weak from diarrhea. His feet were swollen . . . He lived like a frightened animal, cold and hungry . . . ”

The letter writer becomes impassioned, intent on telling the dead boy’s mother that he had learned that honour, courage and patriotism “were all lies”. Then he tears it up.

Most of the speakers emerge as real men, embittered humans relieved of their humanity. It is a shocking book, yet for all the horrors March sees the irony. A man who had enlisted a day after the war began, and who served through until the end, is expected to look on as his brother, who had been drafted at the last minute and saw only two days of action, during which he sustained a shrapnel nick to the shoulder, is treated as a war hero. For their mother the son who matters is the one who got wounded.

Blunt, impartial and candid, Company K is about a group of men, yet it is also about all men, who fight in all wars. It is essential reading.

Eileen Battersby is Literary Correspondent and author of Teethmarks on My Tongue, published by Dalkey Archive Press