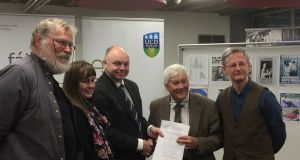 Minute books, correspondence, posters, extensive film footage, and thousands of original photographs are just some of the high-quality literary, musical and visual materials that make up the Clifden Arts Festival archive, which was haded over yesterday to University College Dublin.

This important cultural heritage archive charts the history of the festival and documents the extraordinary range of writers, musicians and artists it has featured. From the beginning it attracted some of the finest names in the arts, including John Behan, Carlo Gébler, Seamus Heaney, John McGahern, Máire Mhac an tSaoi, Paula Meehan, Christy Moore and Bill Whelan. The archive reveals the impact these performances had both on the local community and the region – film footage and photographs capture the moment and allow the experience of the festival to be enjoyed, and explored, long after the event itself.

Founded in 1977 by a regional arts committee, led by Brendan Flynn, the Clifden Arts Festival is the longest-running community arts festival in Ireland and celebrates its 40th birthday this year. Hailed by Booker-winning Kazuo Ishiguro as “Ireland’s best-kept secret” in the 1990s, it has grown over the years from a small community event to one of international importance. This achievement is due to the vision, passion and ambition of Flynn, his fellow committee members and the entire Clifden community. Flynn’s drive for an arts-based education, with creativity and performance incorporated into the school curriculum, has been nurtured over the years and remains at the heart of festival today.

Plans to build a digital archive emerged in 2008 following discussions between Bernhard Sanders, John Durning and Flynn. Sanders, a retired sound engineer and freelance photographer based in Cologne, has been filming Clifden Festival events every year since the late 1990s. For him the Festival is his “personal cultural highlight of the year”. When asked what draws him back annually, Sanders speaks of the “fascinating environment of Clifden and Connemara, the friendliness of the people, the quality of the events, and the mix of the artistic directions”. Back in Germany over the winter months Sanders edits the videos and adds them to the archive. Others contributors include Joseph Breen, Don Brown, Arnaud Cuvier, Shiraz Damani , Juliane Friedrich, Jamie Howard, Paddy Howard, Eamon McLoughlin jr., and Colin Russell. All these materials will be preserved and, where possible, made accessible to a wider public, both nationally and internationally.

This substantial digital archive will now be brought to Ireland and, along with the paper archive, deposited in the UCD Library. Digital archives require a high level of expertise to assure their preservation and continuing availability for scholars and enthusiasts.

Academics and postgraduates in the College of Arts and Humanities at UCD will work closely with the archive and forge links with future festival events, in keeping with UCD’s commitment to the preservation of Ireland’s cultural heritage and the formation of partnerships with individuals and institutions in the field of the arts. The Clifden Arts Festival archive complements UCD’s innovative Irish Poetry Reading Archive, which captures the voices of Irish poets and is creating a unique record of the contemporary poetry landscape.