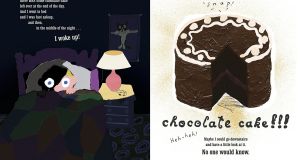 Verse for children can often be sickly-sweet, but there is a careful balance struck between virtuous and naughty in Sarah Webb and Steve McCarthy’s second collaboration, A Sailor Went To Sea Sea Sea: Favourite Rhymes from an Irish Childhood (O’Brien, €16.99).

Webb has gathered a wide range of rhymes and songs - some literary (Thomas Moore, James Joyce, Padraic Colum and Oscar Wilde all feature) and some plain fun (“On top of spaghetti, / All covered with cheese, / I lost my poor meatball, / When somebody sneezed”).

The nod to a very specific Irish tradition of verse, without being overly beholden to it, makes this an anthology ideal for young children both here and abroad.

McCarthy’s illustrations similarly nod towards familiar motifs while being distinctively modern, utilising sharp angles, cut-outs and often-skewed proportions. It adds up to a beautiful book sure to be appreciated by a wide audience.

In this tremendously relatable account of yearning for delicious treats, young Michael wakes up in the middle of the night and ventures downstairs to look at the leftover chocolate cake. “Just have a little look at it,” he thinks, but then he notices some crumbs . . . “So I think, if I lick the end of my finger, I could pick up some of those crumbs and no one would know anything about it.”

Rosen’s performance of this piece has over 4 million views on YouTube and his conversational tone is just as evident in the print edition, enriched by Waldron’s depiction of the big-eyed, eager child and the luscious cake that tempts him. An important note: not one to read on an empty stomach.

Torben Kuhlmann’s Lindbergh: Scéal luchóige a d’eitil (Futa Fata, €14.95) began life as a final year art project, and has now been translated from German to Irish by Andreas Vogel and Máire Zepf. When a young mouse builds a flying machine to get to America, he faces both technical difficulties and a threat from the owls lurking nearby.

The story is followed up with biographical notes about real aviators, and pairs up relatively straightforward text with spectacular illustrations. Kuhlmann pays careful attention to the scraps of machinery used to create the plane, and the sepia-toned portraits of great ships, dusty trains and city skylines emphasise the historical setting.

Readers less confident with the Irish language may wish to note that the English-language translation is available from North-South Books (£12.99).

The Hundred and One Dalmatians in pictures

Dodie Smith’s classic novel has been abridged and simplified by Peter Bently and illustrated by Steven Lenton for a picture book version of The Hundred and One Dalmatians (Egmont, £6.99).

Understandably, much of the nuance and charm of the original is lost (the idea of dogs viewing humans as their pets, for example), but the shape of the plot is preserved surprisingly well. The bright, colourful pencil drawings lend themselves well to this streamlined adaptation for young readers.

A team highly familiar with adaptations of the classic is the Reduced Shakespeare Company, a theatre troupe who have spent nearly forty years bringing ‘complete’ if ‘abridged’ versions of literature and history to audiences, including a ninety-minute compilation of every Shakespeare play.

Long-time company members Reed Martin and Austin Tichenor team up with illustrator Jennie Maizels for Pop-Up Shakespeare (Walker Books, £16), an absolute treat of a non-fiction book that serves as an accurate if often irreverent introduction to the Bard.

The caption for Hamlet holding Yorick’s skull, for example, reads, “Hamlet thinks deeply about family skullduggery [SIC]before he acts”, and the one-liner summary for Macbeth is (the undeniably apt) “The family that slays together stays together!”.

But there are also plenty of insights into the historical and cultural context of Shakespeare’s work alongside the laughs. This is an ideal gift book for older children.

Sharon Cohen’s The Starman and Me (Quercus, £6.99) draws heavily on Cohen’s science background, in which the titular Starman is an unusual combination of ancient hominid and an unwilling participant in a silicon-chip experiment.

When twelve-year-old Kofi encounters this strange creature, Rorty Thrutch, he soon realises that Rorty is capable of making things happen simply by thinking them: “I’s thinkin and I’s doin,” he explains. “I’s talkin to computer. Is simple-pimples.”

The blend of archaeology and neuroscience makes this a compelling premise, even though Kofi’s capacity to quickly grasp and consider just how dangerous certain powers might be feels a little unrealistic. More convincing are the tenuous alliances formed with the school bullies in order to help Rorty find his companion and keep him safe from a villainous scientist. This debut offers much food for thought for readers of nine-plus.

Judi Curtin’s Stand By Me (O’Brien, €12.99) is the second full-length volume in her series about two time-travelling best friends, though as with all her work, Curtin’s main concern is the dynamic between friends and among family members rather than complicated science fiction. Molly and Beth, who are still adapting to being almost-stepsisters, set out to discover what’s left their uncle Graham so sad about a friendship gone wrong decades ago.

Arriving into the 1960s, where the Latin verbs taught in school sound like “a Hogwarts spell” to these two smart-phone-dependent teens, they begin their hunt for the truth about Graham’s childhood friend. The commentary about the dangers of overly-relying on technology is gentle, and the injustices of the past - particularly relating to the treatment of those with disabilities - are also confronted. The bright cover accurately reflects that this is technically an easy read, but the novel’s emotional impact shouldn’t be underestimated.

Claire Hennessy is a writer, editor and creative-writing facilitator.