The Gestapo was a very small organisation reliant on informers to denounce enemies of the regime, but jealous spouses and neighbours often used it to settle scores 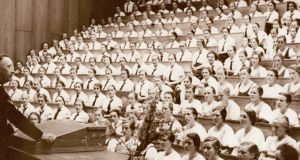 Heinrich Himmler addresses a group of female Hitler youth in 1937. The Gestapo relied on such civilian loyalists to be their eyes and ears. Photograph: Universal History Archive/UIG via Getty Images

The Gestapo was a key element in the Nazi terror system. The very word conjures up a nightmare image of an all-powerful Orwellian ‘Big Brother’ style secret police force keeping the German public under constant surveillance. Films, novels and TV documentaries have embedded this image in the popular mind. But is it true? In reality, the Gestapo was a very small organisation. In 1933, it had 1,000 employees and even at its peak in 1944, its active officers within Germany numbered 16,000, policing a population of 66 million. In Düsselfdorf, with a population of 500,000, there were 126 Gestapo officers in 1937. Essen had 650,000 inhabitants and just 43. The same pattern was repeated in all the other major German cities. Most rural towns had no Gestapo presence at all. The Gestapo was underfunded, under-resourced and over stretched.

Yet this did not mean the Gestapo was a weak or inefficient instrument of Nazi terror. To make up for a lack of staff, the Gestapo decided the vast majority of the population were loyal to the regime. It ruthlessly targeted its resources against groups within German society defined as political opponents, most notably, communists and socialists, religious dissidents, Jews, and a much broader group of ‘racial’ enemies, including long-term criminals, prostitutes, homosexuals, Gypsies, juvenile gangs and the long-term unemployed. If you did not belong to any of these groups then you had no reason to fear a knock on the door late at night by a Gestapo officer.

The Gestapo was extremely pro-active in hunting down communists, who were rarely treated leniently. Over 70 per cent of the surviving Gestapo files relate to communists. In 1933,600,000 communists were arrested and 2,000 killed in concentration camps. The killers were SS, not the Gestapo. By October 1935, of the 422 key Communist Party (KPD) officials in post in 1933, 219 were in custody, 125 in exile, 24 had been killed, 42 had left the party and only 12 were still at large. The fate of communist activist Eva Buch is typical. Eva was studying foreign languages at Humboldt University when she became involved with a socialist resistance group called the Red Orchestra. They had associates in academia and within the Air Ministry. They were accused of passing on secrets to the Soviet Union. On October 10th, 1942, Eva was arrested by the Gestapo after her flat was raided and an anti-Nazi leaflet she had translated into French was discovered. When a Gestapo officer told her during her interrogation she’d be treated more leniently if she named other collaborators within the group, she replied: ‘That would make me as low as you want me to appear.’ She was sentenced to death.

Brave individuals such as this appear frequently in Gestapo files related to religious opponents too. The story of Paul Schneider is particularly heroic. He was a Protestant Evangelical preacher who opposed the attempt to Nazify the Lutheran churches. During the winter of 1935-36, Schneider was reported to the Gestapo on no fewer than 12 occasions for making anti-Nazi comments. He was banned from preaching. He was sent by the Gestapo to the notorious Buchenwald concentration camp and placed in solitary confinement. He would loudly recite passages from the Bible from the window of his cell to comfort other inmates every evening. For this, he was subjected to brutal beatings by SS guards. Karl-Otto Koch, the camp commandant, realised he could not break Schneider. He offered him the chance of release if he signed a declaration promising never to preach again. Schneider refused to sign it. On July 18th, 1939, he was killed by lethal injection. He was 27.

It’s been estimated that only 15 per cent of Gestapo cases started because of surveillance operations. A far greater number began following a tip-off from a member of the public. Every allegation, no matter how trivial, was investigated with meticulous and time-consuming thoroughness. It’s been estimated that about 40 per cent of these denunciations were personally motivated. A Berlin stoker reported a prostitute who gave him venereal disease. She was placed in a concentration camp. Gestapo officers were extremely wary of husbands and wives who informed on each other. A housewife in Mannheim told the Gestapo her husband was making derogatory comments about Hitler’s regime. After a lengthy investigation, it emerged that the wife wanted her husband out of the way to continue a love affair with an off-duty soldier. In another case, two married doctors were involved. The wife accused the husband of carrying out illegal abortions. This led to his arrest and imprisonment. The husband claimed his wife had a vengeful motive. The husband had passed on a sexually transmitted disease to his wife, while carrying on a love affair. Her motive was revenge, but he served eight months in prison before this was finally established.

During the second World War, denunciations increased as a raft of new regulations were brought in. This was a golden age for snitchers. One offence in particular relied heavily on tip-offs from the public: listening to foreign radio broadcasts, particularly those of the BBC. Peter Holdenberg, a 64-year-old disabled bookseller, who lived in Essen, was accused by his neighbour Helen Stuffel of this offence, which carried a prison sentence of up to 18 months. She had listened at the wall of Peter’s next-door apartment. She said she could clearly hear him listening to BBC programmes during the evening. Another neighbour, Irmgard Pierce, corroborated her allegations. Holdenberg was brought in for questioning by the Gestapo on December 10th, 1942. ‘This is all a conspiracy,’ he complained. ‘I’ve had trouble with Stuffel in the past and Pierce always backed her up.’ He depicted the allegations as foolish gossip. He was not anti-Nazi at all. The ordeal of his arrest and confinement in a Gestapo cell was obviously deeply traumatic. On the evening of his arrest, Holdenberg was found hanging in his cell. He died in hospital on the following day, without ever regaining consciousness. His denouncer had caused his death.

The German public progressively realised uttering critical comments against the regime in public had to be avoided. A study of denunciations from the court files of the Bavarian city of Augsburg shows that in 1933, 75 per cent of cases began with a denouncement after overhearing anti-Nazi comments in pubs, but in 1939, this figure had fallen to 10 per cent.

If the success of a police force is measured by the numbers of cases that end in a court conviction, the Gestapo can be regarded as deeply inefficient. A study of a sample of cases that began with public tips-offs from the Würzburg area reveals that only 20 per cent ever went to court and a whopping 75 per cent failed to end up with a conviction.

The Gestapo came to realise investigating false allegations was wasting a great deal of its time. As a letter, dated August 1st, 1943, from the Ministry of Justice in Berlin put it: ‘The denouncer is the biggest scoundrel in the whole country.’

The Gestapo: The Myth and Reality of Hitler’s Secret Police by Frank McDonough is published by Coronet, £20. McDonough is professor of international history at Liverpool John Moores University and specialises in the history of the Third Reich.