Caligula at the Gates by Tomas Venclova 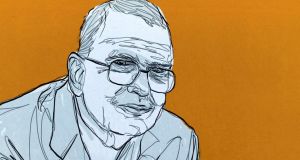 Our respite was short-lived in the end.

But after long hardships it had seemed

It would never draw to a close. Friends

Invoked poetry and feasted in gardens,

Schools upheld the spirit of wisdom,

Markets rustled in the squares each day,

And galleons transported holds of spice.

We marveled at color-washed mosaics

And were tempted by sun ripened fruit,

We ridiculed the words of the prophets

But, agelessly, they proved to be true:

The room is besieged by clashing steel,

Blow out the candles and close the gates.

Beyond them - Caligula and the plague.

(Translated from Lithuanian by Ellen Hinsey )

Tomas Venclova was born in Lithuania in 1937 and took part in Soviet and Lithuanian dissident movements in the 19650s and 60s. His poetry has been published in over 20 languages and his books in English include The Junction: Selected Poems (Bloodaxe Books). He is also the author of an acclaimed guide to Vilnius.