Brendan’s tragic voyage: Behan in the USA: The Rise and Fall of the Most Famous Irishman in New York

Review: The deterioration of Behan’s health and talent during his three-year love affair with the US is the subject of a fascinating book 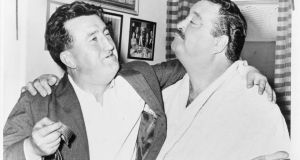 Book Title:
Behan in the USA - The Rise and Fall of the Most Famous Irishman in New York.

In 1960, shortly after the announcement that his play The Hostage was transferring to Broadway, Brendan Behan was having a drink in a Dublin pub with his friend Desmond Mackey. When Behan told him the news, Mackey was not inclined to share his joy.

Behan didn’t argue with him, because he probably knew he was telling the truth. So chronic was his alcoholism, and so fanatical his desire for hero status, that he couldn’t survive the kind of fame that awaited him in New York.

In some ways Behan could be described as the first Irish victim of the cult of celebrity. It would be pushing it to suggest that the United States killed him, but there is no question that it accelerated the process. As his notoriety in the US grew, so his creative output and health diminished. By the end of what might be called the Lost Weekend period of his career he was a physical basket case, the life ebbing from him as he dictated desperately substandard books to meet his contractual obligations.

The deterioration of his health and talent during his three-year love affair with the United States is the subject of Dave Hannigan’s fascinating and exhaustively researched book, which fills in many of the blanks in Ulick O’Connor’s and Michael O’Sullivan’s equally excellent accounts of Behan’s life and times.

Behan in the USA is a frequently funny but ultimately tragic story, in which the author runs his finger along the timeline of the writer’s descent, from the joyful and brilliantly witty Irishman who first arrived in New York to the socially impossible, physically disintegrating drunkard who left the city by boat three years later with a premonition that he wouldn’t live long enough to ever see the country again.

Alcohol-sodden anecdotes
Although never less than entertaining, the downward trajectory of the story is at times difficult to read. As you would expect of any book with Behan as its subject, the pages are bursting with colourful, alcohol-sodden anecdotes, as he crosses paths with a dramatis personae that includes Norman Mailer, Harpo Marx, Jackie Gleason, Arthur Miller, Allen Ginsberg, Bob Dylan and Tennessee Williams.

But the laughter is always underscored by the sadness of knowing how the story ends, with Behan’s death, 50 years ago this year, at the age of 41, the inevitable consequence of his drinking and his neglect of his diabetes.

Hannigan gets the tone of the story right, capturing both the Wildean sharpness of Behan’s humour and the sweetness of his personality while handling the spectacle of his very public unravelling with just the right amount of sensitivity.

It would be difficult to overstate the extent of Behan’s celebrity in the US in the early 1960s, when his play about a British national serviceman held captive in a Dublin brothel as collateral against the life of a condemned IRA man opened on Broadway. Literary heavyweights, such as Williams, Mailer and Miller, sought his company, considering him one of the most vital new voices in theatre, although they stepped away when he began to metamorphose into a stage-Irish showman with an ever-lengthening arrest record.

When he first landed at Idlewild Airport, spouting off-the-cuff witticisms to a happily receptive press, Behan was sober and stayed that way for 54 days. But he eventually fell off the wagon in spectacular fashion after a row with his wife, Beatrice, about an extravagantly expensive designer overcoat, Behan’s purchase of which takes on a Mephistophelian significance in Hannigan’s telling of the story.

The tragic truth was that the US enjoyed Drunk Brendan more than it did Sober Brendan. Even his habit of interrupting his own plays, which had seen him banned from performances in the West End of London, made him the toast of Broadway.

Audiences bought tickets in the hope of hearing him drunkenly heckling the actors from his seat in the stalls or, better still, of seeing him try to augment the performance with a song or a jig. One night, according to popular legend, he called out, “That’s not what I wrote!” then clambered on to the stage only to discover he was in the wrong theatre, watching a Noel Coward play.

The American press devoured stories such as these, keen to cast him as an Irish Dylan Thomas or Jean Genet. Behan was happy to oblige, providing them with a vast acreage of copy about his drunken antics, which elbowed out more serious consideration of his gifts as a writer.

It’s from this point onwards that Behan in the USA follows the often blackly comic downward spiral of his life. There are hilarious encounters with the Marx Brothers and Jackie Gleason. A young Bob Dylan chased him through Greenwich Village just to say hello, and Steve McQueen pursued him across Hollywood, intent on beating him up. He was invited to President Kennedy’s inauguration – the address on the envelope simply read, “Brendan Behan, Dublin” – but banned from taking part in the New York St Patrick’s Day Parade for presenting the United States with a negative image of Irishness.

Brawls, arrests, affairs
Every hectic detail of his five visits to the country is recounted: the brawls, the arrests, the affairs with people of both sexes, the semi-naked escape from a hospital after waking up from a diabetic coma, and the rapid diminution of his talent that was evident in the unfinished Richard’s Cork Leg. These stories are subtly intercut with tales of his extraordinary generosity and his love of humankind.

“New York is my Lourdes,” he said in 1961. “I go there for spiritual replenishment,” although the truth was that the 18 months in total he spent in the US between 1960 and 1963 wrung him out, physically, mentally and creatively.

The book relates the sad story of how, in 1962, between visits to the country he called “my new-found land”, Behan had a telephone conversation with Seán O’Casey, the playwright to whom he was most often compared. O’Casey told him to stop drinking. Behan asked why. O’Casey replied, “Because you have work to do.”

The great sadness, never far from the surface of this story, is that, after two plays and a prison memoir, Behan was already five years past his artistic peak. And the legend he created for himself in the United States – so brilliantly evoked in the pages of this book – had set the clock on his demise.

Paul Howard’s play Breaking Dad is running at the Gaiety Theatre in Dublin.