Black Wave review: From hedonism to the apocalypse 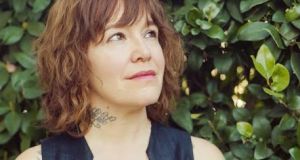 Themes of identity, sexuality and addiction loom large as Tea attempts to write through her demons.

For two decades the feminist and queer counter-culture writer Michelle Tea has documented her experiences in a variety of forms from memoir to essay to feature length films. While she is widely published in America, her new novel Black Wave is her first book for the UK and Ireland. Readers familiar with Tea’s writing will know to expect an intense and astute portrait of lives on the fringes. Themes of identity, sexuality and addiction loom large as Tea attempts to write through her demons.

This new book is a Generation X queer woman’s version of late 1990s San Francisco. A metaliterary novel with flashes of mysticism, it is an inventive and challenging read. Its 27-year-old protagonist Michelle Leduski wears no flowers in her hair. Bohemian living is fast disappearing under the gentrification of the city by the dot com millionaires. Even Michelle’s beloved Mission district is losing its edge. The Chameleon has closed, good cocaine is hard to come by, rents have soared. As she documents her drug-fuelled adventures around Valencia Street and its environs, Michelle seems like the last girl at the party. And as the city cleans itself up, Michelle is spiralling downward.

Her hedonism makes for an exhilarating first half, told with a third person omniscience that sardonically reflects on the mess. First to go is Michelle’s stable girlfriend Andy: “Sometimes Michelle felt resentful toward Andy for being so moderate, for sipping some ridiculous fake drink like a daiquiri while Michelle got hammered on shots and cocaine”. Beguiled at an open mic event by an 18-year-old poet, Michelle finds herself taking ever more risks for her highs, which end, unsurprisingly, at heroin.

As a published author, our narrator is adept at describing her experiences: “Heroin was love, the generic of love, what you got if you couldn’t afford the original.” In a scene that will stay with readers, Michelle hits rock bottom after a binge, vomits on the street outside her apartment while she callously dismisses Andy, then trudges back up the dingy stairwell with “years of grime” sticking to her feet.

As with her acclaimed memoir writing, including Rent Girl, Valencia, and How to Grow Up, Tea paints a gritty picture of queer living. Fictional Michelle is from a working class family of two gay women – her mothers Kym and Wendy – and lives the penniless existence of a frustrated artist who dreams one day of saving a thousand dollars. Having already written a memoir on her life to date, Michelle finds she has little left to say and also worries about her invasion of privacy of her family and friends. Tea uses her background as a memoirist to bring Michelle’s character and writing difficulties to life. The first half of Black Wave reads like a lightly fictionalised autobiography with a fascinating look at a subculture.

Meditations on the femme and butch aesthetics are interesting and often funny. Elsewhere, the plight of gay teenagers is to the fore: “To be a butch girl in high school, to be better at masculinity than all the men around you, and to be punished for it!” Michelle ties her life decisions to her sexuality and struggles to find her identity: “Being cast out of society early on made you see civilisation for the farce it was, a theatre of cruelty you were free to drop out of. Instead of playing along, you became a fuckup”.

But this ‘fuckup’ knows she has to grow up. Fearing that she has become an “aging and hysterical femme who could not handle her cocaine”, and realising her addiction to alcohol and drugs, Michelle heads south to her gay brother Kyle in LA, determined to clean up her act before the new millennium.

As luck would have it, her new life is to be a short one. The end of the world is fast approaching, which sees the novel take a mind-bending shift into the world of apocalyptic fiction. Time destabilises in an alternative America of poisoned mists, exploding planes and mass suicides, brought on by the alienation of modern life. It is a hugely inventive twist that takes the road-to-recovery storyline and literally smashes it to pieces. Dream synchronicity with perfectly matched lovers, bioluminescence and sex with Matt Dillon all feature as Michelle’s sobriety quietly takes effect in the background.

There is the sense that to escape from the world of San Francisco, everything as she knows it must end. At the start of Black Wave, “Michelle was a poet, a writer, the author of a small book published by a small press that revealed family secrets, exposed her love life, and glamorized her recreational drug intake”. By the novel’s end, the glamour of her former life has given way to a hard won peace that will see her through to the end of days.