Best books of 2014 for children and young adults

From tickling the funny bone to portraying sympathetically the raw realities of life, there’s plenty of enjoyable reading for Christmas

From Shh! We Have a Plan by Chris Haughton

The best of the children’s and young adult books published in 2014 were distinguished by their variety, their originality, their literary and artistic excellence and their high production values.

The 30 titles listed here, chosen with particular age groups in mind, reflect all of these qualities, and should provide enjoyable reading over the Christmas holiday and well beyond.

A picture book with no pictures? Yes, really – but just look at some of the words!

An only child adjusts humorously and poignantly to the arrival of a “new small person”.

Simple text and dynamic artwork combine in a comic story of hapless hunters and an elusive bird.

Attractively illustrated seasonal story featuring a little boy and his grandfather enjoying their snowy fun day in the park.

Three dogs go shopping: one wanders off and chaos results in this whimsical combination of word and picture.

Mayhem ensues in nonterrestrial worlds when a spaceship comes under attack, not least from cannibalistic cakes.

Excellent compendium of old favourites from the classic fairytale repertoire as well as some poetic Duffy originals.


Once Upon an Alphabet, by Oliver Jeffers
(HarperCollins, £20)

A story – not merely a word – for each of our 26 letters makes this a stand-out alphabet book, beautifully produced and wittily illustrated.

Willy the chimp makes 10 journeys into various classics of children’s literature: how many can you identify?

Beyond the Stars, edited by Sarah Webb
(HarperCollins, £12.99)

Twelve “tales of adventure, magic and wonder”, written and illustrated by major talents of the Irish children’s literature world.

Six teenagers and a five-year-old boy witness the dreadful events in Stalingrad in 1942.

Evie lives in a New York world of returning fathers and custody battles. This is a perceptive view of young adolescence, cleverly blending the light-hearted with more serious aspects.

A quirky novel, translated from German by Siobhán Parkinson, celebrating the colourful absurdities of humanity, of bicycles and of brumellas.

Emily Gravett’s magical illustrations enhance this alternately mischievous and poignant story of imaginations and their gradual decline as adulthood approaches.


The Sleeper and the Spindle, by Neil Gaiman and Chris Riddell
(Bloomsbury, £12.99)

Poetry provides an outlet for 13-year-old Apple when her absent mother returns.

Young teenager Oscar goes missing, but is he dead? His friend Meg sets out to discover the truth.

Haunting poetic novel describing the transformation in a teenage girl’s life when a young man called Orpheus comes along.

Hannah, aged 15, becomes pregnant. Who is her child’s father? A witty, non-judgmental treatment of a well-worn theme.

Wickedly offbeat fantasy detective story: a chief inspector and his apprentice attempt to solve a murder mystery in a land of elves and werewolves, luchrapáns and vampires.


Jane, the Fox & Me, by Fanny Britt and Isabelle Arsenault
(Walker Books, £15)

A young girl finds solace in literature in this imaginatively conceived and excellently executed graphic novel. 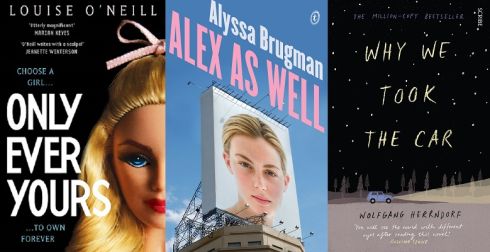 Alex, brought up a boy, comes out as the girl he considers himself to be: always thought-provoking, sometimes hilarious.

A “futuristic” novel for all young women – and all young men – to make them question their individual and societal roles in the world in which they actually live.

Powerful, atmospheric novel detailing an American teenager’s discoveries as she disinters some of the tragic secrets of her privileged family.

A raw, funny and courageously outspoken novel centring on a Glaswegian teenager and his Tourette’s syndrome.

Offbeat contribution to the road trip novel as teenagers Mike and Tschich take a picturesque jaunt across Europe.

How the financial crisis screwed fairness, and what to do about it

Colm Tóibín: ‘I don’t think I learned anything at all from cancer’

Colm Tóibín: ‘I don’t think I learned anything at all from cancer’