A story of love and war with film written all over it: The Good Italian

Enzo is the lonely harbour master of sleepy Massawa, in the Italian colony of Eritrea, in the 1930s. Then Aatifa enters his life. But this is no Mills & Boon of the desert: it’s a powerful history lesson about a little-known theatre of war 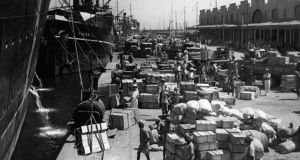 At war: soldiers at the docks in Massawa in 1935. Photograph: Mondadori via Getty

The blurb on this book declares it to be a story of “love and war and of finding hope in the midst of chaos”, and although The Good Italian is a love story it’s also a satisfyingly gritty one.

Stephen Burke is not a stylist: the writing is basic and to the point. In the first few pages he gives scene-setting details and plonks facts into the text rather than weaving them into its fabric.

Pretty soon, though, this nuts-and-bolts style is flowing smoothly, and, except for a few moments of cliche and overstatement, the style gets out of the way of the narrative and becomes a clear lens through which to view the story.

It is no surprise that the book came to life as an idea for a film. Its fluid cutting between scenes and stories is cinematic. The story is the thing – and it’s a great story.

The central character is Enzo, the Good Italian of the title and the harbour master of the port of Massawa, in the Italian colony of Eritrea, in the 1930s. The port is a sleepy outpost of the Italian empire. Enzo has been there for five years and is a man wedded to his job, a job he takes pride in.

But Enzo is lonely. His friend Salvatore, the colonel of the local garrison, and other Italian friends have local concubines. Egged on, Enzo advertises for a housekeeper but is hoping for more – “It’s what they expect,” says his friend.

The ad brings Aatifa into his life. She is a strong-minded local woman, and the woman he will love, but their relationship is initiated shockingly, as Enzo awkwardly attempts to get his share of the colonial action, highlighting the exploitation of the natives by the “civilised” colonial personnel.

Despite this a relationship develops, but it is within the reality of the times: this is no Mills & Boon of the desert. Aatifa, who has her own family troubles, is a brilliantly realised character, and her story provides twists and revelations as the novel progresses.

The story cuts effortlessly between locations: the port, Aatifa’s home, Ethiopia and Asmara, a mock Italian town in the mountains of Eritrea. Here are resonances of more recent colonial endeavours and certain Green Zones.

Gradually the sleepy colony falls under the new thrust of Mussolini’s fascist drive to empire. An official, Bobbio, arrives from the ministry of Italian Africa to implement the invasion of neighbouring Ethiopia. One of the great attractions of the book is the unobtrusive history lesson about this little-known theatre of war. Ordinary people The book is good at following ordinary people and showing how their desire to lead ordinary lives, or simply to do a good job, finds them co-opted into a wider corrupt regime – whether it’s Enzo’s pride in running his port, the Eritrean Iggi gaining initial self-confidence by joining the Italian forces invading Ethiopia, or simply the crane operator responding to Enzo’s thumbs-up praise for gently landing a looted Ethiopian obelisk on a ship for transportation to Italy.

There is the odd moment of coincidence that in lesser hands could have been a problem, but here any reservations are lost in the propulsion of the powerful narrative. It’s a really good book, which features excellent storytelling and rounded characters to really care about. It is a book with film written all over it.