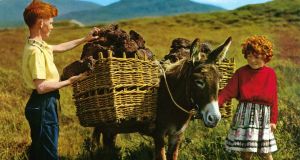 Warm tributes have been paid in north Connemara to Paddy “Red” Lydon, the ginger-haired boy immortalised in an iconic John Hinde postcard of the west of Ireland.

Lydon, who was photographed collecting turf with his younger sister Mary and a donkey half a century ago, died in Galway this week aged 65.

Millions of visitors are believed to have been drawn to Connemara from the 1960s by Hinde’s depictions of a simple peasantry working an unspoilt landscape, where, naturally, it never rained.

Hinde sold millions of his “Views of Ireland”, which were printed in his factory in Cabinteely, Co Dublin, yet Paddy Lydon often joked to friends that he was paid just half a crown for his modelling.

The Somerset-born photographer was often accused of “manufacturing” images which were initially popular, but were later dismissed as the “apogee of kitsch”.

However, Lydon’s family recalls that the young boy and his sister, Mary, were out collecting turf to fill their donkey’s creels near their home in Derryinver when Hinde came across them.

“All he asked them to do was to go home and change their clothes,” first cousin Pat Lydon told The Irish Times .

The postcard was not a feature on Lydon’s mantelpiece, and he didn’t talk too much about it afterwards, his cousin recalled. “He would joke that his father, Christy, had cut the turf and had made everything in it – the kids, the creels – except for the ass!”

While the card travelled the world, the red-haired boy, who was one of five siblings, stayed at home and never married. His sister Mary moved to England. Their mother was fatally injured in a road incident in the mid-1970s, and their father died in 1979.

“He was a fine carpenter who made good currachs,” said his neighbour, Eamon Lacey.

He was also a “quiet man” with “close friends”, who would be missed in the locality, according to Margaret Veldon of Veldon’s in Letterfrack.

Hinde sold his postcard business in 1972 . In 1993, he was “rehabilitated” in artistic circles when an exhibition of his imagery was staged by the Irish Museum of Modern Art.

Interviewed in The Irish Times, Hinde rejected the “kitsch” label. “I photographed donkeys and cottages simply because you can’t imagine a Connemara bog without a donkey walking across with panniers filled with peat,” he said.

“It’s part, of the landscape the same way the Irish cottage is like a living thing which grew out of the ground. It’s true that in some cases my images were doctored and distorted, but if you photographed a beautiful scene off the west coast of Ireland, it would come out as practically monochrome, so we set out to create visually the impression you’d thought you’d had.”