The cinematic eye of Patrick Morrison

Utopia and dystopia loom large in the work of the Cork-born painter, who died last year 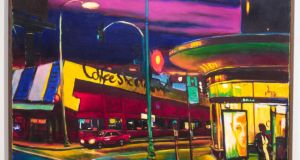 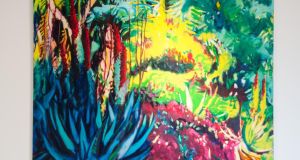 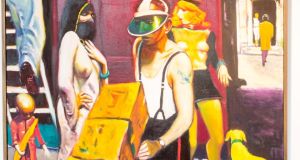 As part of this year’s Imagine Arts Festival, Greyfriars Gallery in Waterford celebrates the work of the late Patrick Morrison with a small retrospective exhibition of his work. Morrison, who died late last year, was a naturally gifted representational painter whose life followed an unusual trajectory. He was born in Cork, in 1945, and from an early age he seemed destined for a career in athletics. When he was in his early teens his family moved to London, and he quickly excelled as a runner, competing at a national level for both England and Ireland on different occasions.

He won an athletics scholarship to Stanford University in California. It’s fair to say that the countercultural mood of the 1960s came into play at this point. Morrison clashed with the conservative athletics regime but stayed on at Stanford, where he majored in English. At the same time, he had something of a secret cultural life. His mother, Mary “Mamie” Hourihan, painted, and Morrison had quietly followed her example. He later remarked on how a visit to the National Gallery in London, when he was about 15, had bowled him over. It’s notable that he seemed to approach painting with an assured eye right from the beginning.

In San Francisco he sneaked into classes at the Art Institute and earned himself a scholarship to attend as a legitimate student. He was also involved in music and played blues harmonica, becoming caught up with Ken Kesey, Neal Cassady and the Merry Pranksters. These years were formative for his approach to painting and living. Later, he looked back fondly to the way art and music at the time were part of an enveloping social and political vision. There was a genuine “change of consciousness” in the air, an energising belief that artistic activity could change society.

From 1971 he was based in Los Angeles. Initially he painted LA as a paradise of Valley life, sun-tanned bodies, swimming pools, generously irrigated vegetation. Later he moved on to the grittier world of downtown street life. The initial gardens of Eden became a staple subject, often revisited, including in his Irish landscapes. Sometimes there is a calculatedly excessive, sickly quality to the blooms, as though it’s all on the verge of collapse. He is also a good painter of LA’s urban nightlife, of darkness and the glitter of electric light, the atmosphere suffused with desire and indulgence. That night world became another recurrent theme, including in Mexico City and Paris, where he noticed the ritualised stance of sex workers in the red-light district.

Morrison spoke of his liking for Edward Hopper and Max Beckmann, with a more cautious long-term respect for Matisse, and in many respects his own work comes somewhere between the first two, with a sprinkling of the latter. It’s expressionist but also measured; representational and deeply informed by the western classical tradition, but at the same time edgily contemporary. Moving to California was a bit like entering into the Technicolor world of cinema that he had first glimpsed in the Ireland of his childhood that he recalled as being austere and short on colour.

As it happened, his work appealed greatly to many in the film world. He was a friend of director Wim Wenders, who collected his work and used it in his films. Other collectors included Dennis Hopper, Faye Dunaway, Sir Ben Kingsley, George Lucas and Nick Nolte. One can see why. There is something cinematic about Morrison’s way of seeing.

Curiously, as suggested by that division between uptown and downtown, day and night, there is a dual utopian-dystopian edge to his vision. He is an exceptionally fluent, even loquacious painter, relishing lush, rich settings, although he renders them sparingly. That is, he’s a judicious technician; he doesn’t lash on the paint. Although he loves colour and enjoys heating up the temperature with bold arrangements and strong contrasts, his carefully composed images are cannily judged. He likes jumps in perspective: the foreground detail that frames a figure in the background and allows us a way into the painting. It’s rare to find a work by him without real dynamism. While it’s fair to cite a cinematic quality, it’s no exaggeration to say that he lived in a world of paintings. He saw things in terms of paintings. From his early teens he had a direct, almost visceral connection with great painting. His was not a narrow, prescriptive vision, as can often happen with an artist, and he was exceptionally open and responsive to a wide range of work, from Titian to Cézanne to the colour field abstraction of Ad Reinhardt. He was always ready to be engaged, keen to take on a visual challenge.

There was, he felt, a kind of magic in great paintings, something transformative. It was his love for looking, allied to a fascination with the mechanics of picture-making, that enabled him, as he put it at one point, to grasp the visual nature of modern life, especially modern life in LA and the West Coast. Even driving through the city, he continually saw things in terms of paintings to be made.

Patrick Morrison: A Retrospective. As part of the Imagine Arts Festival 2014, at Greyfriars Municipal Gallery, Greyfriars, Waterford until Oct 26. imaginartsfestival.com