My favourite Bob Dylan album? That’s easy, thanks for asking

After a seven-year hiatus, the bard released the wonderful, deeply personal ‘Time Out of Mind’ in 1997 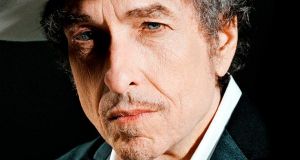 Bob Dylan: too many album, which to choose?

The problem with being a walk-in Bob Dylan jukebox is that everyone has their own favourite song. Except for me.

It’s like being asked your favourite hour of the day. Or your favourite view of the sky. It changes continually, even though he has the song to fit any time or space.

So when someone hands me a guitar and asks me to sing my favourite Bob Dylan song they lose me every time. The best thing to do is to gently nod and then sing something else. Warren Zevon maybe. Or Townes Van Zandt.

But my favourite Bob Dylan album? That’s easy, thanks for asking.

It’s coming up on 20 years already, and that summer of 1997, some of which was spent teaching English to a group of French chefs at the Shelbourne Hotel, or still chasing that dream of making it as a long distance runner, but mostly sitting in my bedroom learning new riffs on my 50th anniversary edition Fender Telecaster. Just Like Tom Thumb’s Blues. Shelter from the Storm. Tell Me, Momma.

In the three years since stealing Highway 61 Revisited from my younger brother (followed by his copy of Robert Shelton’s biography, No Direction Home), Dylan had become an irrepressible force and influence for reasons I still can’t fully explain. Only things were beginning to wear a little thin.

By then I’d absorbed his entire back catalogue, all 29 studio albums, and whatever bootlegs they were still selling on O’Connell Bridge. I’d lost myself in the words and the music and still couldn’t get enough of it, but it had been seven years since he’d released his last album of original songs, Under the Red Sky, in 1990, and that was no classic (wiggle ‘til you’re high, wiggle ‘til you’re higher, wiggle ‘til you vomit fire).

Two recent albums of all acoustic covers, Good As I Been To You and World Gone Wrong, made for easy listening, although they didn’t sound great on my Telecaster.

It had been more than two years since he’d played the Point Depot in Dublin, in April 1995, when I felt like the youngest person in the crowd (probably because I was). The next morning I hung around outside his hotel on Leeson Street to get his autograph and Dylan signed it straight away (there was no one else around).

By that summer of 1997, Dylan wasn’t finished but felt like he was heading there: not irrelevant but losing his power of reinvention. Seven years is a long time for any singer to go without releasing new material and despite the already great archives I can’t remember anyone suggesting he should become the first songwriter to win the Nobel Prize for literature. Except for me.

On June 1st, he was set to kick-off his 1997 European Tour in Millstreet in Cork, and a few of us had planned on driving down in my dad’s old Audi 80. Three days before the gig it was announced he’d cancelled, which Dylan never did. It turned out he was seriously ill with histoplasmosis, a potentially fatal infection of the sac surrounding his heart.

“I really thought I’d be seeing Elvis soon,” he said, after being released from hospital in LA. The question then was if we’d ever see Dylan again.

By the end of the summer he was back on the road, and on September 27th, played three songs for pope John Paul II in Bologna. Three days after that came the release of his new album, Time Out of Mind, and few could believe how good it was. Not even me.

Nothing had prepared me for the stripped down honesty of the opening track, Love Sick

I’d cycled into town and bought it on cassette in Golden Discs on St Stephen’s Green, then played it on my walkman on the way home.

I’m walking through streets that are dead
Walking, walking with you in my head
My feet are so tired, my brain is so wired
And the clouds are weeping.

Nothing had prepared me for the stripped down honesty of the opening track, Love Sick, Dylan’s vocals suddenly the main instrument of the song, as if shoved to the front of the mixing desk. And the voice, more distinguishable and at the same time frailer than ever, as if echoing on itself.

This was the deliberate ploy of album producer Daniel Lanois, who had worked with Dylan before on Oh Mercy, in 1989, and also U2’s The Joshua Tree. Lanois later described using the vintage Sony C37A microphone, made famous by Frank Sinatra, to best capture Dylan’s voice, over-driving it through a small guitar amplifier for additional impact. It instantly set the tone for Time Out of Mind.

Time Out of Mind may lack the verbal hallucinations of Blonde on Blonde, but it is unmistakeably autobiographical

Dirt Road Blues then raised the tempo, and lyrically it just kept giving and coming back for more: “The ghost of our old love has not gone away”, from Standing In The Doorway; “I’m strolling through the lonely graveyard of my mind”, from Can’t Wait; “When you think that you lost everything, you find out you can always lose a little more”, from Tryin’ to Get to Heaven, where for the first and only time on the album Dylan slips gently into a harmonica solo.

Time Out of Mind may lack the thin, wild mercury sound and verbal hallucinations of Blonde on Blonde, or the vicious confessionals of Blood on the Tracks, but it is unmistakeably autobiographical.

This is not Dylan reinventing himself again but simply being himself, maybe even for the first time. A little distant, possibly uncertain, definitely in touch with his mortality. The album cover suggested as much: Dylan sitting alone in the studio, slightly out of focus.

He’d written the songs during the winter of 1996, approaching his 56th birthday, while holed up in his farm in Minnesota, then recorded it at Criteria Studios in Miami the following spring, thus completing it before his illness that summer. Still it sounded like he was prophesising his own brush with death.

“I’ve been down on the bottom of a world full of lies
I ain’t looking for nothing in anyone’s eyes
Sometimes my burden seems more than I can bear
It’s not dark yet, but it’s getting there.”

That song, Not Dark Yet, is so foreboding that he might well be singing it to himself. Dylan later described making the album as “a struggle every inch of the way” and wasn’t even certain he’d release it. That most of the songs come layered in instruments added to its depth, but then out of nowhere he lightened it up too, with Make You Feel My Love, which most people still seem to think was written by Adele (she does have 129 million views on YouTube).

Then as if to prove to himself as much as anyone else he could still write great lyrics just for fun, he closed the album with Highlands, all 20 verses and 16 and a half minutes of it, his longest ever song.

“Every day is the same thing out the door
Feel further away than ever before
Some things in life, it gets too late to learn
Well, I’m lost somewhere
I must have made a few bad turns.”

If the critical success of Time Out of Mind pleased Dylan, some of the interpretations, typically, didn’t: “People say the record deals with mortality – my mortality for some reason,” he told Rolling Stone in 2001. “It maybe just deals with mortality in general. It’s the one thing we have all in common, isn’t it?”

Maybe Dylan didn’t realise how far he’d gone in revealing himself. Either way, Time Out of Mind won him three Grammys, including his first Album of the Year, and with it came a new lease of life.

He completed a trio of revival albums with Love and Theft and Modern Times over the next nine years, and Tempest, released in 2012, once again helped create some of “new poetic expressions within the great American song tradition” that last October won him that Nobel prize.

On October 1st 1997, the day after releasing Time Out of Mind, Dylan played Love Sick live for the first time, in Bournemouth, and it’s been central to his set ever since (he’s now played it live 797 times in all). He’ll play it again at the 3Arena in Dublin on Thursday night, and almost 20 years later, it still sounds as great on my Telecaster.

Bob Dylan plays the 3Arena, Dublin on Thursday. The concert is sold out