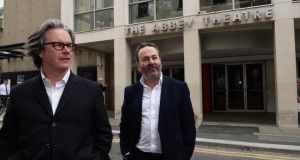 The Abbey Theatre in Dublin has appointed Neil Murray and Graham McLaren as directors of the theatre. Photograph: Cyril Byrne /The Irish Times

The Abbey Theatre has announced the appointment of Neil Murray and Graham McLaren as the theatre’s new directors .

The pair come to the posts from the National Theatre of Scotland. Neil Murray is currently executive producer, with Graham McLaren currently associate director.

In their roles for the Abbey, they will work together as a joint leadership team, with both taking the title of director.

Murray and McLaren will start on July 1, 2016, working alongside the Abbey’s current director Fiach Mac Conghail for six months, before taking up programming from January 2017 on. Fiach Mac Conghail leaves the post after 12 years in the role.

The board of the Abbey Theatre began its search for a new director in April 2015, and encouraged joint applications.

“Neil Murray possesses international experience as a creative and commercial executive producer while Graham McLaren holds a distinguished reputation as a theatre director and designer. They have both been instrumental in the development of the National Theatre of Scotland in recent years.

“ They advocate a great vision for the future of the Abbey Theatre, particularly with regard to growing our presence and reach across Ireland and the world.”

In a statement, Neil Murray and Graham McLaren said: “We believe in the concept of a national theatre that reaches all of the country. This applies to touring work, but also addresses the issue of where shows and projects are rooted and made, regardless of geographical remoteness or perceived social barriers.

“We also believe in an international perspective that will take the Abbey Theatre’s best work out of the country on a regular basis and bring exciting international artists to Ireland.

“We believe that we can tap into the amazing talent and resource that exists in Ireland, to build an organisation that challenges assumptions around the words ‘national’, ‘theatre’ and ‘Ireland’ and deliver a truly exciting, successful and sustainable Abbey Theatre.”

At the age of 25, Graham McLaren established Theatre Babel, and served as artistic director for Perth Rep Theatre Scotland, and associate artist for Necessary Angel Theatre Co in Canada before joining National Theatre of Scotland in 2010 as associate director.

Celebrating a society of outcasts: the homeless prostitutes known as Curragh wrens
10