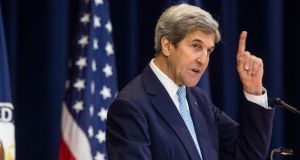 On Monday and Tuesday, about 30 Irish SMEs will have the opportunity to pitch their business ideas and technology relating to the marine environment as part of the Our Ocean Wealth Summit.

They could not ask for a better and more influential potential audience – the summit will see more than 30 heads of state, UN representatives and ambassadors from island nations, along with former US secretary of state John Kerry and former Irish president Mary Robinson.

With climate change and its effects on rising sea levels an increasingly urgent agenda item, there has never been a better time to vie for attention.

Enter the Marine Industry Showcase, organised by Enterprise Ireland which never seems to miss a promotional beat. The showcase will examine two key themes – Marine Internet of Things technologies and innovation, including smart ports, smart shipping and maritime communications; as well as the emerging opportunity for the offshore wind sector.

The latter will take in both the existing technology of fixed offshore wind, in which turbines are attached to the seabed, and emerging floating technology.

The theme of this year’s Our Ocean Wealth Summit is “Shared Voices from Small Island Nations”, those on the precipice of climate change effects.

On Friday the incoming Chinese ambassador to Ireland He Xiangdong will give the opening address at a business conference at which both IDA Ireland and Enterprise Ireland will present on the emerging trade opportunities between the two countries.

The annual Sino-European Entrepreneurs Summit will visit Ireland for the first time as an extension of the main London event being opened by former UK prime minister Gordon Brown. Organised by the Sino-International Entrepreneurs Federation, the Irish element is a reflection of increasing trade relations.

It is of considerable value too – more than 100 Chinese business leaders and government officials will arrive here, just days after the departure of US president Donald Trump and his administration which has locked horns on the trade agenda.

That will have little bearing in Dublin of course, where the focus will be firmly on opportunity. Since its establishment in 2008, the summit says it has prompted more than €650 million in Sino-European projects.

And who can forget Brexit? Certainly not Sandy Sheerin, Ireland’s summit organiser. “We are really excited to host this internationally renowned summit in Ireland for the first time,” she said. “Building new and worthwhile trading relationships is vital for Ireland in a post-Brexit environment, and China has so much to offer in this capacity.”