Wage disparity between men and women is widening

Ireland is no exception to global trend with gender pay gap growing 14.4% 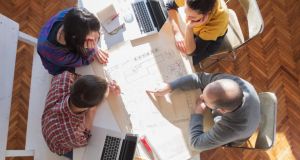 The International Labour Organisation found men were paid more than women in all 38 countries examined. The biggest pay gap was in the US, where women earn $64.20 on average for every $100 earned by a man

Should women be paid less than men? The answer would obviously seem to be no. Yet it seems wage disparities are still alive, well and even widening, both in Ireland and elsewhere.

A survey of more than 72,000 managers in the UK, which was carried out in mid-August, revealed that women bosses there earn 22 per cent less than their male counterparts. They are therefore effectively working for free for one hour 40 minutes every day. This is equivalent to 57 working days a year.

One interesting finding – particularly given that British prime minister David Cameron recently announced plans to force large companies to publicly report wage disparities – is that the pay gap is widest for employees of organisations with between 250 and 999 staff. Women working for such companies earn on average 27 per cent less, making them 5 per cent worse off than the national average.

The situation is no better here in Ireland with recent figures showing the pay gap between men and women has actually widened in recent years, with women now earning 14.4 per cent less than their male counterparts.

The data came from Eurostat, the European Union’s official statistics body, and was published in March ahead of International Women’s Day. It revealed that Irish women earned almost a sixth less per hour than men in 2012, up from 12.6 per cent in 2008. Moreover, add in pensions to the picture and the situation is worse, with the gender pay gap increasing to a whopping 35 per cent.

That same study showed that on average across the EU in 2013, women earned 16.4 per cent less than men, but the gender pay gap ranged from 3.2 per cent in Slovenia to 29.9 per cent in Estonia.

Meanwhile, in its latest global wage report published in December, the International Labour Organisation (ILO) found men were paid more than women in all 38 countries examined. The biggest pay gap was in the US, where women earn $64.20 on average for every $100 earned by a man.

The British government’s plan to force action on this is to introduce regulations that would require organisations with 250 employees or more to report how they pay men and women.

The thinking behind this strategy is that ensuring transparency would be one of the most powerful drivers for ending wage disparities.

Business lobby groups such as the Institute of Directors and the Confederation of British Industry have voiced concern about the likely introduction of legislation forcing firms to fess up about pay differences. However, some firms, including Lloyds Banking Group, have already committed themselves to supporting the new rules.

Ahead of the introduction of such measures, which are expected to come into force in late 2016 or early 2017, the UK division of the professional services firm Deloitte recently came clean about the gender pay gap within its organisation.

Saying he also supported the British government’s moves, David Sproul, chief executive and senior partner at Deloitte UK, said its gender pay gap stands at 17.4 per cent, around 1.7 per cent below the national figure.

He noted, however, that when looking across the organisation as a whole, the pay gap between male and female employees at each grade is significantly lower, at 1.1 per cent.

“This illustrates that for Deloitte, the issue is far less about how we pay our people and more about the number of women employed at more senior grades,” he said, adding that the firm was looking to bolster retention of female staff and ensure that 25 per cent of its partners were women by the year 2020.

“We believe that without a representative share of senior female employees, average pay will never truly equalise. This is something we are working very hard to resolve,” said Mr Sproul.

Commenting on its survey earlier this year, Eurostat said there were a number of reasons for the existence and size of a gender pay gap and they might differ strongly between EU member states.

Reasons cited include the kind of jobs held by women, the consequences of breaks in career or part-time work due to childbearing, and decisions in favour of family life.

Whatever the causes, appeals to do more about wage disparities are growing.

Eurobarometer statistics published in March showed that a large majority of Irish (81 per cent) and EU (76 per cent) citizens believed tackling inequality between women and men should be a priority for the EU.

Moreover, some 94 per cent of Irish respondents and 91 per cent of EU respondents in the survey agreed that tackling inequality between men and women was needed to establish a fairer society.

In Ireland, there has been little criticism of the growing pay gap from either political parties or businesses.

The National Women’s Council of Ireland has called on the Government and on employers to do more to try to close the gap.

It has urged action on a number of fronts, including greater access to good quality childcare, an increase in the minimum wage and a concerted effort to promote more women into decision-making roles.

“This whole issue needs to be tackled at a number of levels but it requires a consistent approach, and I’d say the Government’s attitude to this in particular is very piecemeal. They are saying ‘Well maybe we’ll do something about childcare here and something about low pay there’ and nothing is being joined up in terms of looking at all the different factors that affect the pay gap.

“We need to take the issue far more seriously than we currently are,” said Orla O’Connor, director of the council.

How can companies work to close the pay gap?

To help employers take action to close the gender salary gap, the Chartered Management Institute in the UK’s recommendations are:

1 CHECK YOUR DATA PROCESSES Can you report on and analyse your gender pay data under current systems? Good data is essential.

2 SEGMENT YOUR WORKFORCE You can’t fully understand gender pay data without segmenting it by seniority levels. If there is a gap, is it caused by particular grades?

3 ALIGN PAY AND PIPELINE DATA Look at the talent pipeline and assess if there are barriers stopping women from reaching senior roles.

4 TRACK CHANGES One year’s data is only a snapshot. Use previous years’ data to analyse trends and identify areas for action.

5 SET TARGETS It’s vital that there are clear targets for change across the business. Use them to monitor progress and drive change.

7 Start reporting Show your commitment to fairness for all employees by publishing gender pay data before the legislation comes into effect.

8 CHANGE OUTDATED CULTURES The working environment has to be more inclusive. Flexible working, support for parents and carers and mentoring by senior managers are fantastic ways to retain and develop employees – of both sexes.

1 ‘No demand... because there are no people’ at well-known Dublin pub
2 HSE says fix for Covid Tracker app has been rolled out to all Android users
3 Buying a second home now that we work from home
4 Nearly 30,000 could lose pandemic payment if they do not confirm eligibility
5 Face masks developed in Ireland could help meat-plant workers
6 Shelbourne Hotel operator Marriott posts bigger-than-expected loss
7 McDonald’s sues former CEO over alleged sexual relationships with employees
8 Bank of Ireland does U-turn after refusal to reimburse ‘smishing’ victims
9 Survey finds ‘huge appetite’ for remote working
10 Spare me the city-dweller’s longing for a rural idyll
Real news has value SUBSCRIBE