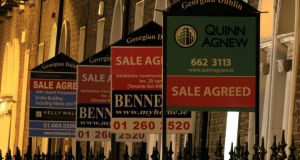 Over the past month or so I have been spending a lot of time with everyone’s least favourite professionals. Our house is up for sale and alternative homes are being sought for various members of the family, which means that every day I speak to assorted estate agents, either to discuss progress in hawking our place, or the possibility of paying an unconscionable sum to buy someone else’s.

Until this exhausting, exciting and thoroughly unsettling process began, I would have told you there were four things wrong with estate agents. For a start, they charge too much. If they sell a house for £1 million they stand to gain about £20,000, a pretty steep return for taking some photos and showing a few people around.

Second, they are untrustworthy snakes, always keen to assure buyers there is “a lot of interest” in some pokey basement, while at the same time telling sellers a mingy offer is the best they will get. Third, they tend to be dim: flogging houses requires no qualifications and attracts those too thick to get into the City or the law. And finally they butcher the language with their dumb, transparent euphemisms.

It took me a couple of weeks of dealing with these loathsome types before I realised something was wrong. They weren’t being loathsome at all. Not one of the dozen or so I’ve met from various firms has been more than slightly aggravating. On both buying and selling sides they have been civilised, bright-ish, borderline trustworthy and some have been downright agreeable. They have been on time for every appointment. They have not tried to push properties at me that are obviously hopeless.

The outfit selling our house appears to be doing the job according to my instructions. As for the language, it is true that a house I was interested in with a “large private garden” turned out to have a medium-sized yard that looked like Steptoe and Son had just moved out, but mostly estate agents play no more fast and loose with words than other professions.

The only real duplicity is over the photos. The camera never lies – except when it has an ultra wide-angle lens attached. In the sales document for our house a two-seater sofa looks long enough to seat eight comfortably.

Why aren’t they extinct?

Travel agents are gone – or going. Estate agents, who were hated long before Tim Berners-Lee gave up train spotting to invent the world wide web, were always going to be the first to go, come the internet age. Instead the reverse is happening: as I cycled home the other day I counted 17 estate agent shop windows in one street.

It makes no sense. In the old days you needed them to tell you what was for sale. Now the internet does that. Google Earth tells you what the place looks like from the outside; the seller can take their own pictures and videos to show what it is like inside. Even pricing could now be done by an average eight-year-old, who could look up what the neighbours’ places went for and adjust accordingly.

The only bit that would be hard to do yourself is show people round, as most sellers are out during the day, and it’s not nice to listen to prospective buyers’ plans to rip out the yellow lino and the William Morris wallpaper you have so lovingly installed. But even this function could be easily disrupted: there could be an Uber of house-showers, who could let prospective buyers into properties, charging not £20,000, but about a tenner an hour.

If animal spirits move markets, the animal spirit in the property market is like a maternal Canada goose on the rampage to protect her young. It’s too frightening out there to do it on one’s own, and we are grateful for the services of the nicely turned out young men and women who stand at our side.

And this, I think, is why we really hate estate agents. Because they are doing something we could do for ourselves if we trusted ourselves more, if we were not so afraid of such ginormous sums, and if we were more level-headed about the places where we live.