Investment promised to return club, whose playing fortunes are in the doldrums, to the top 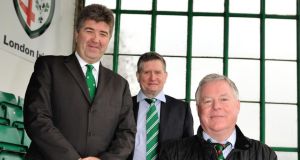 From left: David Fitzgerald, Philip Cusack and Michael Crossan are part of the consortium which has taken a majority stake in London Irish’s parent company.

Five years ago, London-Irish came within a hair’s breadth of glory when they fell to Stade Toulousian in the semi-final of the Heineken Cup. Today, they are second from the bottom of the Aviva Premiership.

Now, a majority stake in the club’s parent company, London Irish Holdings, has been bought by a group of London-based Irish businessmen, including the founder of the waste-recycling firm, Powerday, Mick Crossan. London-born Crossan’s ties to the club go back to the early 1980s: “The first game was against Leicester. They lost, but the place was buzzing. I thought, ‘What are they like if they win?’,” he said yesterday.

To now, London-Irish has been owned by 850 shareholders, though majority control – the shares bought by the consortium – was held by just a few.

For now, the consortium, which includes businessmen, Philip Cusack and David Fitzgerald, owns 52 per cent, but an offer under Takeover Panel rules is to be made to the remaining shareholders.

London-Irish is loss-making. In fact, it has lost money in every year since rugby went professional, Fitzgerald told The Irish Times yesterday. “We are doing this as an investment, yes. But it is about passion, too. It is a bit of both,” said Cusack, MD of Cusack Tool Supplies and a club supporter since 1989.

The ambitions are three-fold, including a determination to improve the club’s Aviva Premiership rankings, with a return to being one of the top four clubs in England. In addition, Crossan, particularly, is intent on restoring the club’s player academy to its former glory – one that was so successful that Chelsea FC came to learn lessons. “The academy isn’t what it was a few years ago,” Crossan said, sitting in the club-house in Sunbury in south-west London that has been sold. The sale of the Sunbury grounds for housing was completed in the summer, while the new training grounds and clubhouse at Hazelwood a couple of miles away will open next summer.

London-Irish’s games are played at the Madejski Stadium in Reading, which has attracted supporters from the Thames Valley, but turned off some of those based in London. The club is contracted to stay in Reading until 2025/26: “It is possible to succeed with a Reading base. We’re getting 9,000 crowds. Most other Premiership teams would be happy with that,” said Fitzgerald.

However, the lack of a stadium is a handicap, limiting revenues: “Close to half of the Premiership teams are profitable – those that are own their stadiums, Northampton, Leicester,” he goes on.

The decision to buy the club comes against the declaration by English clubs that they will not play in next year’s Heineken Cup, unhappy about commercial and broadcasting rights. A departure by the English, with nothing to replace the Heineken Cup leaves London-Irish and other clubs with eight “free” weekends – a nightmarish prospect for both coaches and accountants. For now, the new majority shareholders are satisfied that the confrontation will be brought to an end, even if the route to that conclusion is so far not clear.

In the 1990s, the club became home to Irish players unhappy with the length of time it took the Irish Rugby Football Union to opt for professionalism – which still impacts on some relationships. But the mistakes made then on players’ wages will not be repeated, says Fitzgerald, who, amongst other things, advises the Abu Dhabi royal family on investments. Over the last five years, wages for Premiership players in Britain have jumped by “nearly half”, he said: “There has been undoubted pressure.”

The pressure for the best-quality talent is heightened by the deep pockets enjoyed by well-funded French clubs: “We can’t compete with that, and we are not going to do so,” he went on.