Empowering employees to propose improvements, no matter how small, can add up to major change 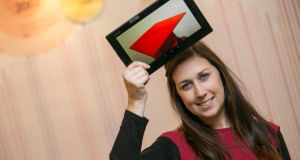 Lorna Brady joined Vodafone Ireland through the company’s first graduate programme: “I have found [in Vodafone] that ideas are taken on board and people are encouraged to develop them and make them happen,” she says

Life-sized cardboard cut-outs of comic book superheroes like Wonder Woman and Batman aren’t quite what you’d expect in the headquarters of a leading mobile telecommunications company but they are strongly in evidence in Vodafone Ireland. They are there as a physical manifestation of the company’s 1000 Small Things Superheroes Campaign which is aimed at fostering a culture of innovation by getting staff throughout the organisation to contribute their ideas on how to make life easier for Vodafone’s customers.

“The germ of the idea came about when we were looking at how we had succeeded in changing our culture to become far more innovative”, explains Vodafone Ireland HR director Rachel Mooney. “And we realised that we had to change again and that we couldn’t be complacent. The idea is that every person in the organisation feels personally responsible for making things easier for customers – and that’s not a million euro software improvement or whatever, it’s all the little things. If everyone can contribute one small thing that’s 1,000 improvements for our customers and that’s very significant.”

The superheroes are part of the healthy competition which has grown up around the initiative.

“Being Vodafone we are very competitive so we’ve introduced an element of competition to make it fun and exciting”, says Mooney. “Each function has adopted a superhero character and each week we have battles between superheroes with the functions pitting their ideas against each other. It has been great for functions like mine where we don’t normally engage with customers. It has made us focus on the customer experience and think much more about it and the rest of the organisation. 1000 Small Things has the potential not only to improve our customers’ experiences but also to increase employee engagement overall.”

Another step the organisation took in fostering innovation and new ways of thinking was the introduction of the graduate programme in 2009. During the 18-month placement the graduates go on three rotations, the first month in retail and in the call centres, so they can experience the full customer life cycle, the second rotation is a project that is suited to the subject they have studied in college and the final rotation is in an area completely outside of what they have studied.

First intake
Lorna Brady joined Vodafone Ireland through the first graduate programme. “I was part of the very first intake of graduates and there were just 10 of us”, she recalls.

“It was very interesting because culturally it was something Vodafone was not used to. But it has evolved a lot since then and the graduate programme is now very much business as usual.”

While the graduates might have taken some getting used to for Vodafone the company held some surprises for them as well. “One of the things I was quite surprised by was how much Vodafone is open to change”, says Brady. “When we joined first the ceo told us not to be afraid to rock the boat and ask why we do things in certain ways and to bring new ideas about new ways of doing things.”

And this wasn’t mere rhetoric. “I have found that ideas are taken on board and people are encouraged to develop them and make them happen. For example, one of the graduates I started with has developed an app for new starters in the business. It is effectively an induction pack on your phone or tablet. It tells new employees where to find all the resources the need. It’s quite a simple idea but it is proving very useful.”

Making it happen is the keystone of Vodafone’s innovation culture according to innovation manager Joel Gomez. “Having ideas is not the problem; collecting ideas is not the problem; it’s not innovation if you don’t make them happen. We try to encourage creative implementation of ideas and we give our people the resources to turn their ideas into reality. We strongly believe that none of us is as smart as all of us and we work on ways to get everyone to contribute their ideas. Our aim is to have an organisation where innovation is so embedded that it is seen as business as usual.”

According to Mooney, leaders like Gomez are vitally important to making innovation happen in Vodafone. “The role of the leader is not necessarily to come up with the ideas but to respond well when others come up with them. And when someone comes up with an idea they need to find the resources to support them in developing it and making it happen. And this doesn’t necessarily mean money. It is the time, the encouragement and the space they need to work on it.”

The attitude to ideas which don’t work out is crucially important. “The leaders have to provide the air cover for employees who are working on ideas. By this I mean that there should be no negative impact if things don’t work out. The important thing is that they tried and that they gave it a go. Next time it might be a runner. We don’t want to put people off.”

Celebrating success is equally important. “We need to celebrate when something does work”, Mooney adds. “And we need to celebrate in the same way regardless of how small or large the impact of the idea is. People need to feel a sense of achievement for seeing their idea through. If they don’t it will stifle the spirit of innovation which we are fostering here.”

Good communications and the physical environment are other important facets of the innovation culture. “People make big and small decisions every day and the more information they have the better decisions they make. We make sure that all our employees get all the information they need whether it’s on new technologies, new products, corporate matters, or even the social club. This allows people contribute ideas areas of the organisation outside their own function.”

The physical layout of the headquarters building also supports this cross-functional engagement.

“A lot of innovation is about creating conversations in a building and an awful lot of buildings actively work against that by putting up walls and other barriers between people. We have taken away the walls and the barriers as part of our New Ways of Working initiative and that has resulted in more conversations and a lot more innovation.”

1 Ireland has fifth-largest number of billionaires per capita in the world, says Oxfam
2 Irish rents see second-highest increase in the EU since 2007
3 Boeing’s 737 Max will fly again in 2020, Avolon predicts
4 Chris Johns: Ireland risks populist culture war over property and pensions
5 State-backed Finance Ireland weighs stock market flotation in 2020
6 PTSB finance and operations executives vie for chief executive job
7 Companies should not use the climate crisis as a scapegoat
8 Ireland ranked second in Europe for data breach notifications
9 ‘The only time I saved money was some coins in my first piggy bank’
10 Irish billionaires, Hogan goes to Davos, PTSB’s CEO race and Ibec’s election wishlist
Real news has value SUBSCRIBE