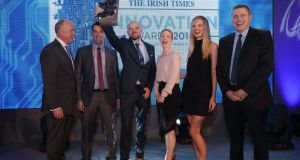 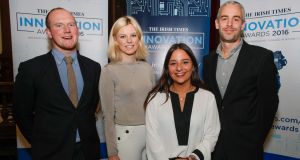 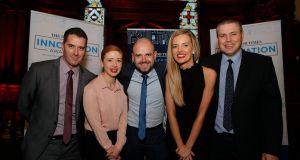 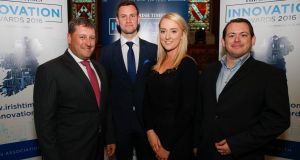 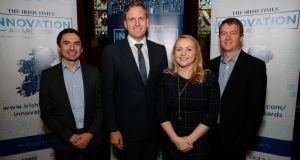 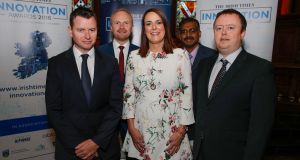 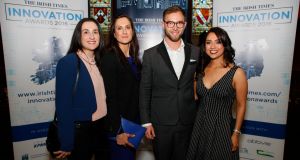 Limerick IT firm Arralis, which has developed a powerful radar and communications system for commercial use has won the overall ‘Innovation of the Year’ award at The Irish Times Innovation Awards 2016.

The company which is based in the University of Limerick took first place in the ‘IT & Telecommunications’ category and went on to compete against six other category winners to claim the top award.

The aim of the Awards, which are now in their seventh year, is to showcase and reward excellence in innovation across a range of products and services. Over 300 companies registered for the Awards this year.

The awards ceremony, held in the Royal Hospital Kilmainham, was attended by over 220 people, including the Minister for Jobs, Enterprise and Innovation, Mary Mitchell O’Connor.

It was not all about the plaudits for winners, however. In his keynote speech, entrepreneur Jerry Kennelly strongly criticised a lack of cohesive state policy in the education of software engineers that is limiting potential and damaging its key players.

Kennelly, who sold his company Stockbyte to Getty Images in 2006 for US$135 million, told the 220 guests at the awards night in the Royal Hospital Kilmainham, Dublin, how behind all the Irish entrepreneurial success in recent years, there is a dirty little secret. “Many of our homegrown start-ups depend on technology innovation and software development in particular. Yet Irish students are not choosing software development in any large scale and there is a huge shortfall in qualified Irish graduates. It’s ironic that as our economy has become more sophisticated and with Irish-owned firms becoming global leaders themselves, that the lack of cohesive state policy in this area is limiting potential and damaging its key players.”

Kennelly outlined how he began as a photojournalist before setting up Stockbyte. His more recent venture Tweak.com, which was a category winner in the Irish Times Innovation awards in 2012, has been lucky to have attracted really talented Portugese software engineers.

“The bottom line is that our competitive position as a nation is being seriously eroded by the failure to address this imbalance,” he said.

Kennelly also pointed to the success of the IDA’s foreign investment strategy as making the problem even worse. “Every small start-up must compete against Google, Facebook and others for software developers. This imbalance has hugely unintended consequences on the indigenous entrepreneurs as they seek to build their businesses alongside the giants. For the past five years at least thousands of software engineering jobs have gone unfilled in Ireland as the giants suck up all the available talent like a giant factory ship. That talent isn’t being used for real software development; most of it being used for sales and support.”

He said software engineering needs to move from “its unfair positioning from an occupation for the geeky and introverted to what it really deserves, a place for the smart visionaries of the future”.

Kennelly outlined how this problem was “a great opportunity for Government to spring into action just the same way they did with the housing crisis”. Setting a target for 5,000 software engineering graduates every year he said “let’s aim to become the greatest location in the English-speaking world for software developers and provide not just the support but also the infrastructure for an entrepreneur-led economy”.

As overall winner, Arralis will receive a communications and advertising package from The Irish Times worth in excess of €150,000, along with a UCD Smurfit Business School scholarship for an Executive Education programme commencing in 2017.

The key to the capabilities of the Arralis 94GHz chipset is its high frequency band. Arralis chief executive Barry Lunn explained: “This chipset is particularly well suited to space travel but it also has some very useful terrestrial applications. We are bringing it to a commercial scale. It can be used in commercial helicopters, drones and ultimately in autonomous or self driving cars.”

“Radar for autonomous cars is not quite there yet,” Lunn says. “In heavy rain a Google car will just pull over because of the limitations of its radar. Cars equipped with 94GHz radar will be able to drive through rain or fog or snow without difficulty. People are always looking for better radar and that is what we are offering.”

Dublin-based Moocall won the Agri-Food category for its revolutionary device which is placed on a pregnant cow’s tail and which alerts the farmer to the onset of labour. Architect David Craig’s Scriba - an ergonomic digital pen for use with tablets - was the Creative Industries winner while Mastercard Labs ‘pay at table’ technology won the Fintech category. Coindrum’s innovative way of allowing travelers to exchange leftover foreign loose change for duty free shopping vouchers won the New Frontiers category.

Derry based Bloc Blinds won the Manufacturing category for its fabric changing roller blind which allows the user to swap the fabric of the blind as often as they like without replacing or even removing the system from the window. Bray based Megazyme International won the Life Sciences & Healthcare category for the analytics kits it develops for food and drink manufacturers and which enables these companies to test their products.

You can find out more about all of this year’s winners and finalists on our Innovation Awards section.