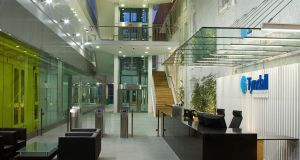 Tyndall says it received €3.4 million in Government grants, while its research generated €26 million

The Tyndall National Institute in Cork has reported revenues of €31.6 million for 2015, down slightly from €31.8 million the previous year.

In its annual report the research institute says it received €3.4 million in Government grants, up from €2.9 million the previous year, while its research generated €26 million in income. The contribution from University College Cork was €2.15 million.

The report says Tyndall is involved in 26 projects as part of the EU’s Horizon 2020 programme launched in 2014. These projects have a total value of €140 million with the EU Commission contributing 70 per cent of the funding and the rest largely matched by industrial partners. The report also states the investment in Tyndall activities from these projects is €13 million with an additional €13 million coming from its Irish partners, including €8.5 million from industry partners.

Tyndall is carrying out research with over 200 industry partners, from local to multinational, in areas such as the Internet of Things, life sciences, agritech, communications, energy, and the environment. It also recorded over 220 peer-reviewed publications in 2015, an important benchmark in the research community.