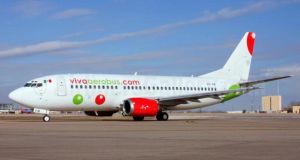 Irelandia has already invested heavily in VivaAerobus, a Mexican airline where Declan Ryan sits on the board

The Ryan family’s aviation empire is spreading its wings further across the globe.

Joe Mohan, the chief executive of the Viva airline group, backed by the Ryan family’s Irelandia Aviation, has announced that the low-cost carrier is to start operating flights across Central America from a base in Costa Rica.

Irelandia, in conjunction with Mexican bus company IAMSA, has already invested heavily in VivaColombia and VivaAerobus, a Mexican airline where Declan Ryan sits on the board.

The group is being lined up for a future flotation, so expanding into central America with a new brand, VivaCan, is an obvious growth option.

Mohan said the group is hoping to price its flights at about $100 each way, targeting a huge market where the low-cost model has yet to reach the saturation level it has in Europe, where Ryanair is top of the pile.

Like its two existing sister airlines in Colombia and Mexico, the new venture will follow the stingey Ryanair model.

Mohan declined to specify the level investment: “I won’t give an exact figure, but it’s not child’s play. The investment is very high. It’s common to see airlines come and go, but we have the support of the Ryan family through Irelandia, and also IAMSA.”

Meanwhile, VivaColombia was this week granted a foreign air carrier licence by the authorities in the US. It plans to launch flights from the cities of Bogota and Medellín into Miami later this year.

Ryan could soon be the aviation king of the region. Viva el rey. . .