Ryanair responds to Brexit by shifting growth to Europe from UK 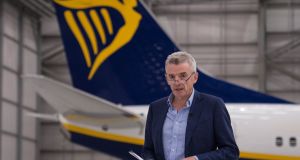 Ryanair chief executive Michael O’Leary campaigned against a Brexit vote. The airline could cut back on flights between Ireland and London as it bids to combat the uncertainty after the vote.

Ryanair could cut back on flights between Ireland and London as it bids to combat the uncertainty created by the the UK’s Brexit vote.

The airline said yesterday that it was planning to cut capacity and frequency on routes out of London Stansted Airport this winter in an immediate step towards moving growth from the UK to Europe.

Chief financial officer, Neil Sorahan, said that it was considering all London Stansted routes, including those from this country, before making a final decision on where to scale back.

“We are going through them at the moment and we have not finalised cuts to any routes,” he said. Mr Sorahan added that the airline would not axe any of the services but would cut back on the actual number of flights.

According to Mr Sorahan, the move to cut back on Stansted is partly a response to the fall in sterling’s value against the euro that followed last month’s Brexit vote.

Ryanair reports in euro, but about 28 per cent of its revenues are in sterling. Its chief finance officer said that a one pence decline in the pound cuts €8 million off its after-tax profit.

Chief executive, Michael O’Leary, said that Ryanair was already significantly ahead of its multi-year traffic growth targets at Stansted, where passenger numbers have grown to 19 million a-year from 13 million two years ago.

“In the near term we expect that Brexit uncertainty will lead to weaker sterling, slower growth in the UK and EU economies and downward pressure on fares until the end of 2017 at least. ” Mr O’Leary said.

Shares in Ryanair surged by 6. 7 per cent to closet at €11.63 after the airline said that it was sticking with forecasts that profits for the current financial year, which ends next March, will increase 12 per cent to between €1.375 billion and €1.425 billion.

Ryanair reported that that profits rose 4 per cent to €256 million in the three months to the end of June from €245 million during the same period last year.

It carried 31.2 million passengers during its first quarter, 11 per cent more than during that period last year. Mr O’Leary said that bookings for the current quarter, which ends on September 30th, were 1 per cent ahead of where they were this time last year, but customers are paying 6 per cent less for seats.

The absence of Easter from the first quarter, terror attacks and repeated air traffic control strikes cut fares by 10 per cent to an average of €39.92. It expects ticket prices to fall by 8 per cent through the first half, which ends on September 30th.

Ryanair returned €886 million to shareholders last month and its borad will tomorrow ask investors to allow further share buybacks should it decide that they are appropriate.

1 Avoca warns of redundancies due to coronavirus
2 Virgin Media vows to withhold sports channels until Eir ‘pays its bill’
3 The Irish Times Company of the Year: the three finalists
4 Errant texts highlight weaknesses in banks’ digital shift
5 Coronavirus spreads to sandwich king
6 Ufurnish: ‘It’s like Skyscanner, but for furniture’
7 Over 400 complaints from migrant workers at meat plants lodged with WRC
8 ‘No demand... because there are no people’ at well-known Dublin pub
9 Taxi app Free Now blames ‘technical issues’ for driver payment delays
10 Coronavirus: We must save lives but we also need to live
Real news has value SUBSCRIBE