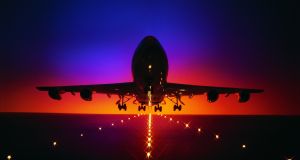 Aviation entrepreneurs the McEvaddy brothers considered seeking funds from third-party investors to help their Irish business tackle its cash flow and financial problems, it has emerged.

Annual returns just filed by Ulick and Desmond McEvaddy’s Omega Aviation Services show that it lost €1.7 million last year and had a deficit of €9.36 million on December 31st.

Auditor Richard Ensor says the figures cast significant doubt on the company’s ability to continue as a going concern, in his report on the accounts lodged by the company.

The accounts state the company “may enter in an arrangement with third-party investors to avail of funding which will address the ongoing cash flow and historical financial issues which have been the cause of many of the recent financial period losses”.

They do not say if the company did bring in new investors and it was not possible to confirm this with Omega on Tuesday.

Omega subsidiaries also include a property holding company and the Vista Primary Health Clinic in Naas, Co Kildare, which was built at a cost of €25 million and opened in early 2009.

The accounts show that Omega had long-term debt of €16.6 million at the end of last year, €13 million of the total was due to trade creditors.

They also show that it provided security for the debts of US companies, Omega Air Incorporated and Bacchus Aviation Incorporated, to the Irish Bank Resolution Corporation.

Pine Investments bought the debts of those companies from IBRC in 2013.