Demand for services from capital has exceeded expectations, says CEO 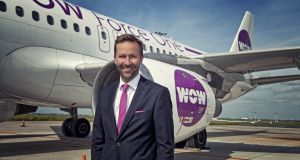 Wow Air chief executive Skúli Mogensen: the airline is already flying from Dublin to Logan Airport in Boston and Baltimore, via Reykjavik

Icelandic carrier Wow Air is considering using Dublin Airport as a base for expansion beyond its current market, according to its chief executive, Skúli Mogensen.

Mr Mogensen, who is in Dublin for an aviation finance conference, said yesterday that booking on its recently announced services from Dublin Airport – via Reykjavik to San Francisco and Los Angeles – had exceeded its expectations.

The low-cost airline flies between 27 cities across Europe and North America via Reykjavik, but is looking for a second base from which Mr Mogensen said that it would begin flying transatlantic.

He confirmed Dublin was one of a number of “strong” candidates.

“Dublin is a great airport and it’s a great hub in its own right. It’s definitely a viable alternative to London for lots of reasons,” he said.

However, he explained that the company would have to apply for an Irish Air Operator’s Certificate – an airline licence – and it would have to consider this, along with other factors.

“If you were to raise the rates, that would kill the model,” he said.

Wow is already flying from Dublin to Logan Airport in Boston and Baltimore, via Reykjavik.

According to its chief executive, it is selling more than 90 per cent of the available seats on those services. The passengers are split 80/20 between leisure and business travellers.

Its fares for these routes start at €99 one-way. It intends offering seats to San Francisco and Los Angeles at €199 one-way.

Mr Mogensen set up Wow in 2011 and says it is growing and profitable. It will more than double passenger numbers this year from 840,000 to 1.8 million.