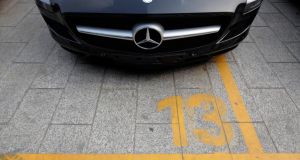 A new Mercedes-Benz car is seen at a parking lot outside a dealership in Beijing. German luxury carmaker Mercedes-Benz has been found guilty of manipulating prices for after-sales services in China, the official Xinhua news agency reported, citing regulators. Photograph: Petar Kujundzic/Reuters

The report made no mention of possible penalties, but China’s 2008 anti-monopoly law allows the National Development and Reform Commission (NDRC), the country’s anti-trust regulator, to impose fines of up to 10 percent of a company’s China revenues for the previous year. An array of industries, from milk powder makers to electronics firms, have been coming under the spotlight in recent years as China intensifies its efforts to bring companies into compliance with the 2008 legislation. The auto industry has been under particular scrutiny, with a wave of investigations prompting carmakers such as Mercedes-Benz, owned by Daimler AG, Volkswagen AG’s Audi and BMW to slash prices on spare parts in recent weeks.

The Jiangsu Province Price Bureau, which launched an investigation last month, found evidence of anti-competitive practices after raiding Mercedes-Benz dealerships in the eastern coastal province and an office in neighbouring Shanghai, Xinhua said in its report on Sunday.

A Daimler spokesman repeated a statement, first made by Mercedes-Benz on August 5th, that it was assisting the authorities with their investigation, adding that it was unable to comment further as it was still an on-going matter. “It is a typical case of a vertical monopoly in which the carmaker uses its leading position to control the prices of its spare parts, repair and maintenance services in downstream markets,” Zhou Gao, chief of the anti-trust investigation at the Jiangsu bureau, told Xinhua. Industry experts say automakers have too much leverage over car dealers and auto part suppliers in China, enabling them to control prices, considered as a violation of the country’s anti-trust laws.

The Xinhua report said the cost of replacing all the spare parts in a Mercedes-Benz C-Class could be 12 times more than buying a new vehicle, citing a report from the China Automotive Maintenance and Repair Trade Association.

Early this month the NDRC said it would punish Audi and Fiat SpA’s Chrysler for monopoly practices. Chinese media reported last week that Audi, the best selling foreign premium car brand in China, would be fined around 250 million yuan ($40.7 million). Foreign car brands, all of whom operate in China through joint ventures with a local partner, have been fiercely competing to up their share in the world’s largest car market. Daimler has said that it wants to boost China sales of Mercedes-Benz cars to more than 300,000 cars a year by 2015, while Audi expects China to make up 40 per cent of its sales by 2020.

Citi analysts said in an August 11th note that, should a manufacturer be hit with a penalty of even 1 per cent of annual revenue, that could erode 10 per cent of its joint venture’s net profit. China’s government has in the past few years stepped up its enforcement of its anti-monopoly law, slapping several multinational companies, including Mead Johnson Nutrition Co. and Danone SA, with fines. The government is conducting an anti-monopoly probe into US tech giant Microsoft, and regulators also recently said US chipmaker Qualcomm had a monopoly.