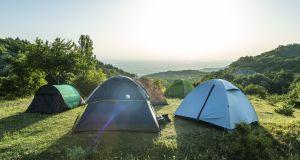 Campsited, a booking platform with its headquarters in Dublin, is in the process of raising an additional €3 million from investors ahead of an expected surge in demand as European holidaymakers look to stay close to home and away from others this summer.

The start-up, founded by Finán O’Donoghue in 2015 and employing 14 people, allows customers to book from more than 2,000 campsites across France, Italy, Spain and Belgium.

Camping holidays rose in popularity last year both locally and overseas, largely as a result of the coronavirus pandemic, which reduced chances to travel farther afield. The European camping market is estimated to be worth up to €12.5 billion with more than 25,000 campsites around the region.

France is Campsited’s strongest market, and rapid growth there last year helped support a fivefold increase in the start-up’s revenue, despite a truncated booking season due to Covid-19.

“We had a big surge in bookings in France due to domestic bookings, and I’d be highly confident we can do even better this year,” said Mr O’Donoghue.

Campsited is to shortly launch RV and campervan rental options on its platform as well as German, Italian and Spanish-language versions of its website to sustain international growth.

“We believe we can achieve all our growth objectives for the year by just focusing on the French market, but as part of a broader pandemic mitigation strategy, we’re also localising the site into more languages in a move to drive demand elsewhere,” Mr O’Donoghue said.

Based at the Digital Hub in Dublin’s Liberties, Campsited has previously raised €2.9 million from backers that include Enterprise Ireland and Motley Fool Ventures, an early-stage fund linked to investment advice group the Motley Fool.

Mr O’Donoghue said the company had already secured €600,000 from backers as part of the new funding round and was seeing strong interest from investors.

“Between the fourth quarter of 2020 and now, an estimated $200 million has been invested in outdoor and camping-related consumer products and services, so it is an area that is of huge interest to investors right now,” he said.