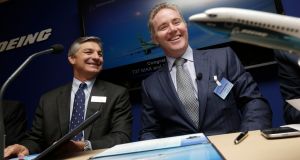 The transaction will transform the Irish firm into the third-largest aircraft-leasing entity in the world with a fleet of 910 aircraft worth an estimated $43 billion.

In a statement, Avolon said it would pay $10 billion for the $9.4 billion net asset value of CIT Group’s leasing unit, representing a premium of 6.7 per cent.

The deal will be funded by a combination of Avolon’s cash, new equity contributed from HNA Group-controlled Bohai Leasing, which acquired Avolon for $2.6 billion last year, and debt financing of $8.5 billion.

The deal will make Avolon four times larger than it was 10 months ago when it delisted from the New York Stock Exchange.

”From a standing start we will have built Avolon into a leading global player in six years,” said Avolon chief executive Dómhnal Slattery.

“We are delighted to announce an agreement to acquire the CIT aircraft-leasing platform. It is a strong business with an excellent reputation in the market,” he said.

“While this transaction is strategically compelling and will double the scale of Avolon, it is not the summit of our ambition. Avolon has a strong brand, a best-in-class fleet, a proven business model and a long-term strategic shareholder committed to the sector,” he added.

Bohai chief executive Chris Jin said: “ The Avolon team has already delivered remarkable growth in building a new platform into a leading industry franchise. They are now taking a further exciting step towards our collective goal to become a true global leader in transport finance.”

Following the merger with Bohai, Avolon took management of the group’s Hong Kong Aviation Capital business, giving it a total fleet of more than 400 aircraft before Friday’s announcement.

Avolon is now the core aircraft-leasing business for Bohai, and its parent, aerospace giant, HNA.

The transfer of aircraft-leasing assets to Ireland last year was cited as one of the reasons behind the 26 per cent jump in gross domestic product (GDP).

However, Jennifer Banim, assistant director general of the Central Statistics Office, said: “ The balance treatment of aircraft in the national accounts means that additions to the fleet of aircraft owned by Irish companies and leased to overseas operators have a minimum impact on GDP.

“ In national accounts statistics, the import of aircraft is offset by an addition to the capital stocks of Ireland, so GDP is not affected,” she said.