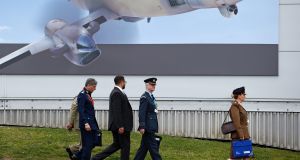 Attendees at the Farnborough Airshow, south west of London: participants report a lower level of dealmaking than in recent years.

Boeing pulled ahead of Airbus in the aircraft order stakes on the second day of the 2016 Farnborough Air Show, announcing more deals in China and one with Europe’s biggest tour operator, before its European rival hit back with a blockbuster 72-jet sale to Go Airlines India.

Airbus struck a preliminary deal to sell the single-aisle jets to India’s GoAir and was negotiating over the sale of 100 more to another Asian airline to try to seize the initiative at a rain-soaked Farnborough Airshow.

GoAir said it had signed a memorandum of understanding to buy 72 of the latest version of Airbus’s top-selling A320 aircraft, worth around $7.7 billion at current list prices.

Meanwhile, AirAsia Chief Executive Tony Fernandes flew into the UK to finalise an order for 100 A321neo jets to support the airline’s expansion plans, confident of striking a deal at bargain prices as planemakers brace for a slowdown.

One source familiar with the negotiations said the jets could be sold to AirAsia for less than its previous large order for the smaller A320neo model, though Airbus sales chief John Leahy said earlier A321neo prices were improving.

Some of the new jets will be for the Malaysian-based airline’s leasing business, sources said.

Last-minute dealmaking extended to the engine makers, as CFM and Pratt & Whitney compete for the right to supply engines for the A321neos, with some negotiators huddled over papers in the corner of an airline award ceremony.

Europe’s Airbus and US rival Boeing have enjoyed years of strong growth thanks to rising air travel and demand for new fuel-efficient models.

Analysts are worried growing risks to the global economy, from slowing growth in China to Britain’s decision to leave the European Union, could dry up orders or even lead to some cancellations.

Underscoring the growing clout of Asia and the Middle East in the industry, Qatar Airways announced a deal to buy up to 10 per cent of Latin America’s largest airline LATAM Airlines in a $613 million deal.