Bidders for parts of insolvent German carrier include Lufthansa, Condor and EasyJet 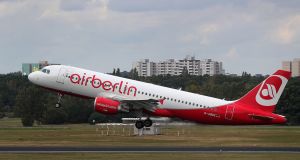 Air Berlin said on Tuesday that about 200 of its 1,500 pilots had called in sick. Photographer: Bloomberg

Air Berlin said it had received several bids from interested parties on Friday, as the race to acquire the most desirable assets of the insolvent German carrier entered the final phase.

Rival airlines and other bidders were asked to table their offers by Friday afternoon, with a final decision on the sale expected on September 25th, a day after the German elections.

The bidders include Lufthansa, Condor and EasyJet, who have made offers for parts of the stricken airline, but declined to provide details. According to people familiar with the process, the interests of Lufthansa and Condor overlap at least in part, with both tabling bids for Air Berlin’s low-cost airline Niki.

In the case of Condor, a subsidiary of travel company Thomas Cook, the bid appears to have been made jointly with Niki’s founder – the Austrian former Formula One racing driver Niki Lauda.

Mr Lauda told Austrian media this week that he and Condor were seeking to take over 38 of Air Berlin’s planes and routes for about €100 million. Condor itself declined to comment on the bid or its partnership with Mr Lauda.

Lufthansa said: “Lufthansa Group has made an offer to buy parts of Air Berlin Group.”

EasyJet also confirmed it had submitted a bid for parts of its short-haul business.

Air Berlin was forced into insolvency in August after its main shareholder, Abu Dhabi-based Etihad Airways, declared it would no longer fund the lossmaking carrier. Over the past six years, Air Berlin has run up deficits totalling €2 billion, while net debt rose to €1.2 billion.

Worried by the prospect of a company collapse in the middle of the summer travel season, the German government stepped in to provide a €150 million credit line.

The loan was intended to keep Air Berlin in operation at least until November, but fears over the airline’s survival were reignited this week when it was forced to cancel more than 100 flights because of an illicit strike by pilots on Tuesday and Wednesday.

Air Berlin said on Tuesday that about 200 of its 1,500 pilots had called in sick, warning that the protest could pose a last-minute obstacle to the sale.

Chief executive Thomas Winkelmann said in a statement at the time. “We are currently in final talks with possible investors. These negotiations can only succeed if we have a stable operation.” –Copyright The Financial Times Limited 2017