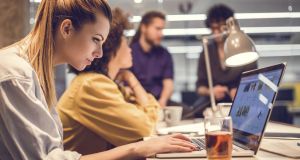 The Ada Lovelace Initiative began in Dublin, but has since signed up schools in Cavan, Louth, Kildare, Donegal and elsewhere

An initiative aimed at encouraging women to enter careers in science, technology, engineering and maths (Stem) hopes to reach 5,000 secondary students in the coming school year, as it moves into Northern Ireland.

The Ada Lovelace Initiative holds a series of free technology talks aimed at transition year pupils, with a series of women role models sharing their experiences.

Women working in the technology sector talk about their education background, career choices and career path, providing a real example to students.

The initiative, backed by technology recruitment firm Verify Recruitment and named after the first computer programmer, began in October 2015 and has reached 3,000 students in 14 counties. The programme began in Dublin, but has since signed up schools in Cavan, Louth, Kildare, Donegal and elsewhere.

It also expanded into Northern Ireland, holding a talk in a Newry school. There are plans to expand to Belfast in the autumn.

Verify Recruitment managing director Cathal Grogan said the first year of the programme had exceeded expectations. “Our ultimate goal was to reach 2,000 secondary school students in our first year,” he said. “The response to the Ada Lovelace Initiative over the past year has been overwhelmingly positive.”

More than 100 volunteers have registered to give talks from 75 tech companies, including TripAdvisor, Restored Hearing, Tapadoo, Udemy, The TAS Group and Oneview Healthcare.

“The success of The Ada Lovelace Initiative depends on the participation of role models across Ireland,” said Róisín Healy of Verify Recruitment. “The only commitment for volunteers is to visit one school each for one hour.”

Among the participants this year was Udemy.com’s vice-president of engineering Claire Hough, who came from San Francisco to visit Dublin’s Mount Carmel secondary school.

Other participants said they wanted to encourage more young women into the field to open up potential careers.

“Having worked in technology companies for the last 20 years I can really see the benefits that women bring in the workplace and I am concerned at the drop in female applicants in technology courses, said Siobhán Maughan, founder of IntegratedThinking.

“I felt the Ada Lovelace Initiative was a way for women like me, who have had varied and interesting careers in technology, to meet with and encourage the next generation of women to focus on technology as a career choice.”