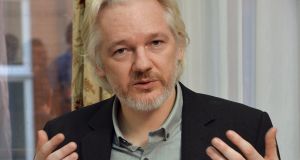 While the votes have been counted and Donald Trump, of the Republican Party, is officially US president-elect, the shockwaves from the US election result continued to be felt at the Web Summit this week.

Many attendees were adopting a “wait and see” approach to the incoming president, but others were still trying to take in the dramatic turn of events.

On the opening day of Web Summit, legal adviser to WikiLeaks founder Julian Assange and member of WikiLeaks’s defence team Juan Branco spoke to attendees about making the internet a safe space for activists and addressed some of the concerns about how recent events had been handled.

He defended the organisation’s decision to publish hacked files that reflected poorly on the Democratic Party, saying the organisation would have published material on Donald Trump if it had been provided with files – as long as it met WikiLeaks’s criteria.

He said, from a journalistic ethics point of view, it would have been impossible to hold releasing the information until after the election.

Mr Branco also defended the organisation’s use of Twitter to highlight material contained in the leaks.

He said the website was the main platform and it was neutral and objective.

He acknowledged there had been a lot of debate about how the Twitter account was being handled, but could not reveal who was behind the account.

WikiLeaks’s Twitter account had been publishing information from the hacked emails of Democratic candidate Hillary Clinton’s campaign manager John Podesta and leaked emails of the Democratic National Committee (DNC) in the run-up to the presidential election.

The information revealed cast a shadow over the Democrats and Ms Clinton’s campaign.

Mr Branco described Twitter as a communication tool that was designed to gather as much attention as possible, and it had been working well – with the account now boasting more than a million followers.

“It’s almost their only way to communicate with people,” he said. “They have to nourish it as much as possible.”