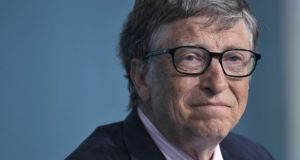 Buddy can you spare a dime? Microsoft founder Bill Gates is still coining it in

Microsoft founder Bill Gates remains the richest man in tech with a personal fortune amounting to $78 billion (€69.74 billion), while Hong Kong-based Zhou Qunfei is the richest woman with an estimated net worth of $6.4 billion.

Ms Qunfei, the majority owner of Lens Technology, one of the world’s largest manufacturers of screens for mobile phones and tablets, is one of just five women to feature on the Forbes top 100 tech billionaires list.

Mr Gates tops the rankings, followed by Amazon founder Jeff Bezos with a personal fortune of $66.2 billion. Others in the top five include Facebook founder Mark Zuckerberg with an estimated net worth of $54 billion, Oracle chairman Larry Ellison with $51.7 billion, and Google co-founder Larry Page with $39 billion.

Mr Bezos and Mr Zuckerberg made the biggest gains in this year’s list.

The top 100 richest tech billionaires are worth a combined $892 billion, a rise of 6 per cent more than last year. The minimum net worth is now $2.2 billion, up from $2 billion a year ago.

California is home to more than one third of world’s richest tech billionaires, with a third also hailing from Asia. Of the five women included in the list, two are American, two are based in Hong Kong, and one comes from Britain.