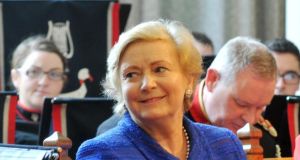 Foreign law enforcement agencies will be allowed to tap Irish phone calls and intercept emails under a statutory instrument signed into law by Minister for Justice Frances Fitzgerald.

Companies that object or refuse to comply with an intercept order could be brought before a private “in camera” court.

The legislation, which took effect on Monday, was signed into law without fanfare on November 26th, the day after documents emerged in a German newspaper indicating the British spy agency General Communications Headquarters (GCHQ) had directly tapped undersea communications cables between Ireland and Britain for years.

The Government has refused to comment on the documents – leaked from whistleblower Edward Snowden – which were reported by The Irish Times last Saturday.

Vodafone and Eircom, who co-own the main subsea cable between Ireland and the Britain, both said they had no knowledge of GCHQ intercepts.

Section 541 enacts the third part of the 2008 Criminal Justice (Mutual Assistance) Act – which defines how Ireland will collaborate with other governments in criminal investigations – six years after the rest of the legislation was put in place.

Interceptions can only be used in cases with reason, where an investigation is under way, and cannot be used to tap calls indiscriminately.

The newly enacted section also allows the Minister for Justice to request tapping in other countries for an Irish-based criminal investigation, and sets out how requests from other countries to Ireland for such interceptions should be handled.

These are separated into requests for technical co-operation, when the assistance of an Irish-based company is needed to set up an interception, and a requirement that the Irish State be notified when a foreign state intends to tap lines but can legally do so without direct Irish assistance.

The provision for the secret courts is exceptionally unusual.

“Even with very sensitive cases in Ireland they’re not prosecuted in camera,” said TJ McIntyre, lecturer at University College Dublin’s school of law and chairman of advocacy group Digital Rights Ireland. “It’s worrying because it means telecommunications companies might be pressured into doing things that aren’t entirely legal.”

The companies would be prosecuted in secret, and would be unable to disclose their objections publicly – or even the fact that they were being prosecuted.

Mr McIntyre said a minister should not have the power to force companies to comply with secret orders.

One legal source said the legislation would likely be interpreted to encompass emails as well as phone calls as “telecommunications” data is generally seen to include emails and, potentially, text messages if they pass through provider networks. However, they would not include so-called “information society services” such as webmail, or social media services such as private Twitter or Facebook messages.

It is understood internet companies are concerned about the implications of the Act, especially after revelations about security agency spying on internet data from such firms. Many of the leading multinationals in the internet and social media sector have European headquarters and significant operations in Ireland.

The Department of Justice said: “The decision to commence part 3 of the Act arises from an obligation under the Treaty of Lisbon whereby the State would otherwise be in breach of its obligation to fully implement the provisions of the EU Convention on Mutual Assistance in Criminal Matters by December 1st, 2014.”