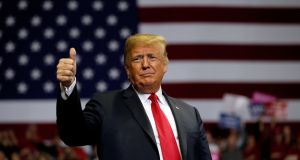 The share buybacks by Apple, Alphabet, Cisco, Microsoft and Oracle since Donald Trump’s tax change came into force at the end of 2017 are nearly double what the companies spent in the whole of last year. File photograph: Carlos Barria/Reuters

The five US tech companies with the largest cash piles took advantage of US president Donald Trump’s tax reforms to spend more than $115 billion in the first three quarters on buying back their own stock.

The share buybacks by Apple, Alphabet, Cisco, Microsoft and Oracle since the tax change came into force at the end of 2017 are nearly double what the companies spent in the whole of last year. That makes investors some of the biggest beneficiaries of a plan that was billed as a boost to US jobs.

They also increased their capital investment by 42 per cent compared with the same period last year, to $42.6 billion, according to Financial Times calculations.

Tech companies have also led a parallel trend, identified in a report released on Tuesday by Moody’s Investors Service, for US companies to channel a large part of their tax windfalls into paying down debt.

The new data add to the debate about the extent to which the tax reforms have boosted investors, rather than stimulating investment and benefiting American workers.

The National Association for Business Economics reported last month that the changes to the tax code had “not broadly impacted hiring and investment plans”.

Tech companies had been sitting on some of the largest cash piles, almost all of it stranded offshore where it escaped an immediate tax. Last year’s Tax Cuts and Jobs Act brought these reserves into the tax net but at a reduced rate – in turn freeing the companies to use the money rather than leave it to continue to pile up.

“Most companies are using cash to buy back stock and make acquisitions, rather than invest in new facilities,” said Walter Price, a tech investment manager at Allianz. “I think this is good for shareholders and management.”

Tech companies were also paying down debt they took on in previous years to buy back shares, he added.

Investors and analysts said that repatriated cash was also contributing to renewed investment. But planning new facilities takes longer than executing a buyback, and will take longer to show up in capital spending figures, said Mr Price.

“There’s a strong correlation between tax reform and capital spending,” added Youssef Squali, an internet analyst at SunTrust Robinson Humphrey, pointing at Google and Facebook, which plan to spend a combined $37 billion between them this year, up from just under $21 billion in 2017.

Moody’s analysis of a sample of 100 non-financial companies with large cash piles found that they had flipped since the tax overhaul was implemented last December from adding debt to repaying it. The selected companies repaid $72 billion of debt in the first six months of 2018, close to the $81 billion they spent on buybacks and dividends, and more than the $47 billion they allocated to capex or research and development.

“In the aftermath of tax overhaul we have seen a drastic change in company behaviour, with companies moving from a net borrower to net payer position,” said David Gonzales, Moody’s senior accounting analyst.