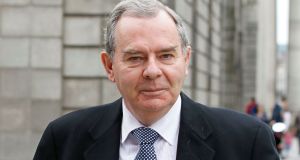 The State-owned bank, in proceedings pending in the Irish courts, is alleging the company was part of a conspiracy orchestrated by the Quinn family.

The family claims that while it set out to frustrate the bank, it in turn was double-crossed and lost control of the situation.

Members of The International Consortium of Investigative Journalists, which includes The Irish Times, have spent more than a year examining a cache of 11.5 million documents and records from Panama-based Mossack Fonseca, one the biggest providers of offshore services to individuals, companies and middle men who advise them.

The leaked files show that as the IBRC fought court battles in Belfast, Kiev and the British Virgin Islands against Lyndhurst Development Trading SA, MF became concerned that its involvement as local agent for the company could see it being accused as a party to fraud.

The files also show that documents associated with Lyndhurst and its attempt to assert ownership over a $44 million debt linked with the mall were purportedly signed months before the company came under the control of its Ukrainian owners.

The IBRC’s clash with Lyndhurst was part of a wider battle to assert control over a property portfolio worth approximately €500 million that had been seized from the Quinn family.

The attempts to frustrate the now-liquidated IBRC cost the State tens of millions of euro because it prevented the sale of assets in Ukraine and Russia that have since massively lost value because of the conflict on the border between the two countries.

The State also lost millions in missing rental income, and from the massive legal bills incurred.

The documents in relation to Lyndhurst are part of the Panama Papers, leaked documents from MF that have led to reports causing massive international controversy.

Members of the International Consortium of Investigative Journalists, which includes The Irish Times, have spent more than a year examining a cache of 11.5 million documents from Panama-headquartered MF, one the world’s biggest providers of offshore services.

The island of 320,000 people has been shaken by revelations that he once owned an offshore company, now controlled by his wife, that had investments in three of its collapsed banks.

Up to 22,000 people took to the streets on Monday in one of the biggest protests seen in the country.

British prime minister David Cameron has insisted that he derives no financial benefit from offshore accounts held by his late father, which were revealed in the leak.

Ian Cameron ran a multimillion-pound investment fund for nearly 30 years, based in the Bahamas to avoid paying British tax.

In the US, president Barack Obama responded to the leaks by saying tax avoidance was a global problem.

“A lot of it is legal but that’s exactly the problem,” he said.

China condemned the leak as a western conspiracy and its censors restricted access to coverage of the leaked documents, which show offshore dealings by the families of president Xi Jinping and other Communist Party leaders.