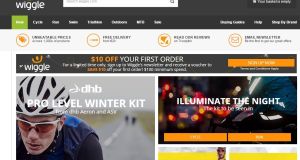 WiggleCRC said about 275 employees will be unaffected by its plans

WiggleCRC, one of the world’s largest online bike retailers, is planning to cut 313 jobs in Northern Ireland following its decision to relocate a large proportion of its warehouse activities currently based in Northern Ireland to Wolverhampton, England.

The company, which was formed earlier this year when the Ballyclare-based family owned business Chain Reaction Cycles merged with one of its chief competitors Wiggle, said it intends to concentrate the majority of its distribution operations through its Wolverhampton base from next summer.

In a statement issued on Wednesday WiggleCRC said in light of a “thorough operational review” following the merger, it had decided to keep both the Wiggle and Chain Reaction Cycles brands and websites and maintain its presence in Britain and Northern Ireland.

But it had taken the decision to consolidate its warehouse operations in Britain because “delivery, including later order cut-offs and speed” was becoming increasingly important for its customers.

WiggleCRC stated: “This necessary step, will require the relocation of significant warehouse activities currently in Doagh, Carrickfergus and Ballyclare.

“As part of this proposal, bikes and frames, including bike assembly handling activities and our wheel build operation would remain in Ballyclare.”

The company said it will now enter into a consultation process with the 152 warehouse staff it directly employs and also begin discussions about the 161 agency workers that are engaged in its warehouse operations in the North.

WiggleCRC has stated it “remains committed to Northern Ireland” and intends to keep a significant number of staff and a management presence in the North.

It said about 275 employees will be unaffected by its plans.

Before the merger in February of this year Chain Reaction Cycles was one of the North’s most entrepreneurial family businesses.

Originally established in 1984 by George and Janice Watson with a £1,500 bank loan, it had matured in to one of the North’s top exporters employing 700 people with an estimated annual turnover of more than £150 million.