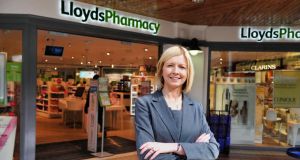 Lloyds Pharmacy is to add up to 60 new branches to Ireland with the creation of 500 new jobs.

The expansion plan is to be rolled out over a three-year period and will increase its total workforce to 1,500.

Its presence will grow from its 91 current stores to about 150.

The pharmacy chain, currently the largest in Ireland, has also decided to invest more than €2 million in a new patient services programme throughout existing outlets.

It had flagged its expansion ambitions last January following a strong sales performance over Christmas.

The chain added 14 outlets during last year, describing the year as “very positive” for sales and said it intended to build on its progress by introducing new products.

Management at the pharmacy has signalled its intent to expand into new communities, consolidating its dominant market position. Lloyds has already set about identifying new sites.

1 Should my mam wait for house prices to drop before buying?
2 Brother is dragging his heels as executor of uncle’s will - is there anything I can do?
3 Covid-19 mortgage breaks: What’s the catch?
4 Covid-19 takeover of private hospitals to cost insurers €180m
5 Almost 70% of home buyers to purchase within next year
6 Revenue faces US drug company Perrigo over disputed €1.64bn tax bill
7 Cheers: Conor McGregor's whiskey races up the sales chart
8 Consumer watchdog tests face masks to make sure they meet standards
9 ‘I’m so lucky to be in the Caribbean – a million miles from Derry Girls’
10 Coronavirus: Workplaces review office design with view to return
Real news has value SUBSCRIBE