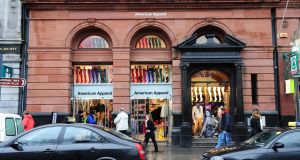 American Apparel on Grafton Street, Dublin, where a liquidator has been appointed. Photograph: Aidan Crawley

The High Court has appointed a provisional liquidator to the American Apparel clothing retailer in Dublin city centre.

Mr Justice Paul Gilligan appointed insolvency practitioner Kieran Wallace, of KPMG, as provisional liquidator on Wednesday to American Apparel Ireland Ltd, which operates a store on Grafton Street, after being told the company was insolvent and unable to pay its debts.

The company, part of the US-based American Apparel group, had been trading in Ireland since December 2007.

Kelley Smyth BL, for the company, petitioned for the appointment of a liquidator following its American parent’s decision to file for bankruptcy in the United States. This meant the parent could no longer support the Irish firm with stock supplies, credit and finance management.

Mr Justice Gilligan heard ownership of the company was transferred a year ago after it had filed for bankruptcy but it had again experienced trading difficulties and once more decided to file for bankruptcy following a resolution by its shareholder.

Similar bankruptcy and restructuring actions have been taken in the various jurisdictions where the group operates in.

The company leased its premises at 114 Grafton Street and its landlord claims to be a considerable creditor, the court heard.

The only realisable assets are the stock in its premises, it was also stated. The company has no warehouse here and the Dublin store sold clothing ordered from other group companies that retained stock on their premises.

It sought Mr Wallace’s appointment so the winding down of the enterprise will be done on an orderly basis.

The judge appointed Mr Wallace and granted him several powers, including to trade and sell the company’s stock, secure the company’s assets and retain the employees.

The matter will return before the court in December.

1 Revenue publishes list of companies tapping State for wage support
2 Trump vs Biden: Stakes are high for the Irish economy
3 How long can Government afford to keep State pension age at 66?
4 Stripe moves payment processing to Dublin due to Brexit
5 Unity Technologies acquires Dublin IT company for €4m
6 NatWest CEO declines to give timeline for Ulster Bank decision
7 Losses balloon at Virgin Media Ireland but revenue rises
8 Irish homeowners must see rates relief if they make it through Covid turmoil
9 Will remote working become the norm?
10 Corporate America is breaking with Donald Trump
Real news has value SUBSCRIBE