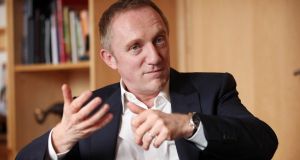 François-Henri Pinault, who took over the Kering business from his father in 2006. Photograph: Simon Dawson/Bloomberg 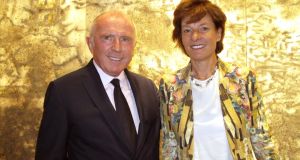 François Pinault, the billionaire who owns businesses including Gucci, Puma and Christie’s which is chaired by Patricia Barbizet (right). Photographer: Frederik Balfour/Bloomberg

Since September, at least nine senior executives have left businesses controlled by French billionaire François Pinault. The latest came this month, when the head of Christie’s International, the auction house’s Americas chief, and the top two people at Gucci stepped down.

And the holding company that runs most of Pinault’s luxury and fashion brands, Kering, has explored a sale of German sportswear maker Puma as efforts to revive the brand drag into a fifth year, though it’s unclear whether the company is still pursuing a sale, people familiar with the matter said this week.

The moves comes as Pinault seeks to assert greater control over the family’s empire. An April reorganisation saw two new business heads appointed to run Kering’s luxury portfolio: one for fashion and leather goods and the other for jewellery and watches. Marco Bizzarri, who was appointed to head the fashion brands, will now take over Gucci.

The new structure, triggered by slowing demand for luxury goods, spurred the departures of many of the executives, according to a person familiar with the company who asked not to be identified.

Last week, Kering announced the exit of Gucci chief Patrizio di Marco and creative director Frida Giannini after five quarters of little to no growth at the handbag maker.

Business is difficult across the Pinault empire, said Rahul Sharma, managing director at Neev Capital which advises companies on on global growth. “Quite a few of their brands have had issues.”

Pinault (78), France’s third-wealthiest person, has had to wrestle with falling earnings at many of his companies. On top of Gucci’s woes, Puma is on track to see a profit for 2014 that is half what it was a decade ago. That calls into question the constant transformation that has become as much a Pinault trademark as the double-G logo on Gucci bags.

Kering declined to comment on the executive departures and possible asset sales.

Over the years, Pinault has been involved in businesses as diverse as lumber, distributing cars in Africa, and running French department-store chain Printemps. And the name of the family’s publicly traded business – now Kering – has changed four times since 1988.

The group has shed the bulk of the early operations, focusing instead on building a luxury empire to compete with rival billionaire Bernard Arnault’s LVMH, or Moet Hennessy Louis Vuitton.

In 1998, Pinault bought Christie’s for $1.2 billion (€0.96bn). A couple of years later he went after Gucci, trumping Arnault in a drawn-out battle.

In 2006, his son François-Henri Pinault took the reins of PPR, as Kering was then known. To step out of his father’s shadow, he added a sportswear division, anchored by Puma. His rationale was that just as Gucci shored up smaller luxury brands such as Saint Laurent, Puma’s scale could benefit the likes of surf- and skate-gear maker Volcom and golf-club producer Cobra.

On December 2nd, the elder Pinault shocked the art world by installing longtime adviser Patricia Barbizet as chief executive of Christie’s, replacing Steven Murphy. She wasted no time restructuring management at the world’s largest auction house, promoting two executives to new top-level positions and parting company with the president of its Americas business. Pinault doesn’t plan to sell Christie’s, a spokeswoman for its holding company said.

Since September, the company has also replaced the CEOs of Brioni, Bottega Veneta, and Christopher Kane, and is seeking another for Sergio Rossi.

Under Di Marco, Gucci had begun measures to make the brand feel more exclusive as shoppers tired of seeing logoed handbags and increasingly sought less showy brands such as Hermes and Celine. He pressed Giannini to design fewer fabric-based bags in favour of purses made with more expensive materials such as supple calf leather and python skin. Marketing was revamped to stress the label’s provenance and craftsmanship rather than its logo.

Still, Gucci sales fell 1.9 per cent in the most recent quarter. Puma’s leaping cat, meanwhile, has stumbled against Adidas and Nike in performance gear, and it failed to capture the imagination of young buyers with sport-inspired streetwear.

While the younger Pinault last year installed a new CEO at Puma and is sinking money into sponsorship and marketing, a recent recovery in sales has come at the expense of profits.

“From a portfolio point of view, it doesn’t make sense”, for Kering to own Puma, said Mario Ortelli, an analyst at Sanford C Bernstein in London. “There are no synergies between sport and luxury.”