Consternation regarding Trump’s victory is understandable, but one point bears repeating: don’t let your politics colour your investment outlook 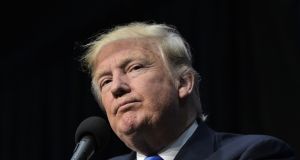 Republican presidential nominee Donald Trump speaks during a rally at the Sioux City Convention Center in Sioux City, Iowa on November 6, 2016. Donald Trump barnstorms five states Sunday while Hillary Clinton implores her most fervent supporters to get to the polls, in a frenetic final 48-hour dash to the US presidential election. / AFP PHOTO / MANDEL NGANMANDEL NGAN/AFP/Getty Images

Not many people – this columnist included – believed Donald Trump’s assertion that stocks would “go great” if he was elected president.

But go great they did, the S&P 500 last week enjoying its best week of 2016. Who saw it coming? Previously, market movements consistently indicated fear of a Trump victory. Ray Dalio’s Bridgewater – one of the most successful hedge funds in history – predicted the Dow Jones could suffer a one-day, 2,000-point plunge. Instead, the initial sell-off was met with a wave of buying that drove indices to all-time highs.

Clearly, investors were relieved by Trump’s conciliatory victory speech. Rather than implementing his wilder proposals, the hope is he will be, as he said last May, “totally flexible on very, very many issues”. Markets like the traditional Republican agenda of tax cuts and deregulation as well as Trump’s promises regarding infrastructural spending and fiscal stimulus.

Additionally, pessimistic sentiment, defensive positioning, high cash levels and technically oversold conditions going into a seasonally strong period meant stocks were ready to rally. Markets like to wrongfoot investors; as Société Générale noted, markets operate on a principle of “buy the rumour, sell the news or, in this case, sell the rumour and buy the news”.

Still, markets are acting like Trump will deliver on all his “good” promises but break all his “bad” promises. That’s naive. Acting presidential after winning is one thing, but how will this inexperienced, narcissistic president behave in bad times? Investor behaviour is reminiscent, as the Economist’s Buttonwood columnist noted, of those “who marry a spouse with a doubtful temperament on the grounds that he or she will change after the wedding”.

It pays to buy the dips in a bull market but investors are deluding themselves if they think there will be no dips. Political risk has not gone away.

StockTake has often warned of the dangers of mixing investing and politics, citing research showing Republican investors underperform during Democrat administrations and vice-versa. Disappointed investors become pessimistic regarding the economy and the stock markets, and it costs them.

This phenomenon was all too obvious last week. In an open letter to his daughter, West Wing writer Aaron Sorkin wailed about economists “predicting a deep and prolonged recession” and how the Dow Jones had “dropped 7,000 points overnight”. If true, that would have a fall of almost 40 per cent; in reality, the Dow was never down more than 5 per cent.

Sorkin’s imaginings may have been fuelled by Nobel economist Paul Krugman. “If the question is when markets will recover, a first-pass answer is never,” said Krugman, who warned of a “global recession, with no end in sight”. A day later, Krugman rowed back somewhat, saying he was “having some second thoughts” about his global recession call.

Consternation regarding Trump’s victory is understandable, but one point bears repeating: don’t let your politics colour your investment outlook.

First Brexit, now Trump. Last week’s surprise result was “another brutal come-uppance” for the pollsters and the data-driven approach relied upon by the investment community, said CNBC .

“The reason they [forecasters] do not know anything is clear,” said the left-leaning Current Affirms magazine. “They are absolutely obsessed with empirical data.”

Actually, the polls, as FiveThirtyEight’s Nate Silver noted, were not that far out. Clinton won the popular vote, just not by as much as expected. The polls were out by about two percentage points – more accurate than in 2012 and “right in line” with historical averages. If one out of every 100 voters shifted from Trump to Clinton, Silver added, the polls would have been spot on, correctly predicting the result in 49 of 50 states.

Polling and forecasting models are imperfect – the latter got Brexit badly wrong – but there is no alternative to empiricism. People and markets are unpredictable, but too much weight shouldn’t be placed upon occasional surprises. Investors should remember that being “obsessed with empirical data” is a good thing, and infinitely preferable to those who like to “feel things”.

Don’t sell; sleep on it

Investors have long been prone to knee-jerk sell-offs. The dangers of panicking seem more marked today than ever before, given how quickly markets are inclined to rebound.

Investors who panic are not getting a chance to rectify their mistake. The solution? Don’t react, says Bespoke Investment Group. Sleep on it, and heed this old piece of market advice: nothing good ever happens in after-hours trading.