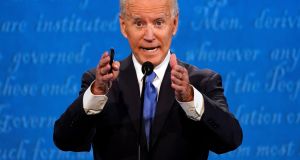 “Your 401ks will crash with Biden. Massive Biden Tax and Regulation increases will destroy all that you have built!”

Donald Trump’s fevered imaginings of market chaos in the event he is not re-elected next week are not shared by investors. According to a UBS survey, 54 per cent of global investors would prefer Joe Biden to win. In the US, there is a 50-50 split but investors in Asia, Latin America and Europe are all hoping for a Biden victory. Pro-Biden sentiment is especially strong in Europe, where almost two-thirds of investors are hoping for a Democrat victory.

Preferences aside, the survey makes clear investors are very focused on what the election might mean for their portfolios. Almost three in four are considering making portfolio changes ahead of the election, while 62 per cent plan to make more changes based on the result.

As it happens, that’s actually a very bad idea. Firstly, presidents don’t have nearly as much influence on stock markets as investors – and, in Trump’s case, presidents – sometimes believe.

Secondly, while some stocks and sectors will be impacted, picking winners and losers isn’t easy. Which policies will be implemented and when? How will this play out in relation to other policies?

As fund giant Vanguard notes, “it’s a calculus that challenges even professional money managers”. For long-term investors, the best response to election uncertainty is to do nothing at all.