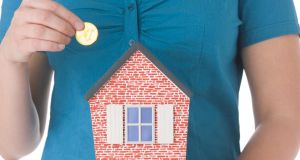 A couple living in a two-bedroom apartment in Dublin will take up to four years to save a deposit to purchase a three-bed home, new research from the Central Bank shows, while those living in Connacht can save enough for their first home in just seven months.

And the introduction of the regulator’s mortgage-lending rules, as well as rent and house prices increases, means it is taking up to two years more for Dublin residents to save a deposit for their first home than it did in 2014.

In a new report, the Central Bank has sought to estimate the number of years of saving required – time to save – to buy a three-bedroom home for a couple with no children and one car, renting a two-bedroom apartment, based on average incomes and typical living expenses. It excludes the impact of gifts from parents, etc, which can help speed up the process in saving for a deposit.

It should be noted that many prospective home buyers might find it more difficult to save than the examples given in the survey; for example, according to the survey, a couple earning €54,000 combined, and paying rent of €476 a month somewhere in Connacht, should be able to save a deposit of €8,319 in seven months, while a couple earning €109,728 in Dublin should save a deposit of €76,000 in a little over 2½ years.

Nonetheless, the study offers an interesting perspective on the difficulties faced by first-time buyers (FTBs) in some parts of the country.

Unsurprisingly, residents of the capital will take the longest to save a deposit, given the elevated nature of both rents and house prices. Figures from the regulator show home-buyers in Dublin will need to save for between 2½ and four years, depending on the location of the property, which is “in line” with international evidence, the Central Bank says.

The study shows those looking to buy in south Co Dublin face the steepest challenge in getting their deposits together, with lending rules and house-price increases conspiring to raise the down payment required from €35,000 to €76,000 in two years. This means the average FTB (based on a couple’s income of €109,728 ) will take 2.6 years to save a deposit in the area, or more than five years if their income is €50,853.

If you’re buying a house outside the capital, the study shows that saving for a deposit should not take as long, given lower average house prices, lower rents and the fact that you might only need a down payment of 10 per cent under the Central Bank’s ceiling of €220,000.

The study also illustrates the impact of the Central Bank’s mortgage-lending rules, which require an FTB to provide a minimum down payment of 10 per cent of the first €220,000 and 20 per cent of the purchase amount over €220,000. As previously mentioned, this has pushed up the required deposit up considerably (by €40,000 in south Co Dublin for example), and also the time to save. In Dublin, prior to the rules FTBs needed only between one and two years to save their deposits; now it’s between 2½ and four, while outside Dublin FTBs needed only six months to save a deposit prior to the rules.

1 Avoca warns of redundancies due to coronavirus
2 Coronavirus: We must save lives but we also need to live
3 Taxi app Free Now blames ‘technical issues’ for driver payment delays
4 Grounded Aer Lingus pilots develop fix for turnaround glitches
5 ufurnish: ‘It’s like Skyscanner, but for furniture’
6 BT and Arnotts unlikely to be last retail victims of Covid-19
7 National Broadband Plan customers to get triple the expected download speeds
8 Virgin Media vows to withhold sports channels until Eir ‘pays its bill’
9 Cork and Dublin airport workers to vote on work practice changes
10 Companies without tax clearance shut out of Covid wage subsidy
Real news has value SUBSCRIBE
Save money on international transfers