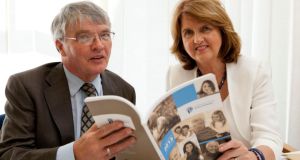 Public service pension schemes are the source of an “unacceptably high proportion” of all complaints to his office, the pensions ombudsman Paul Kenny has said.

Speaking at the publication of his annual report for 2013, he also said legal costs associated with the increasing tendency to appeal his findings to the courts were placing “ a large drain on the resources” of his office.

“I should point out that a majority of appeals against my determinations have been brought by various arms of the State, from Government departments to semi-State bodies,” said Mr Kenny. He noted elsewhere in his report that the public service accounted for just over 30 per cent of his new caseload in 2013, broadly in line with previous years.

He said appeals to date had been won and costs awarded.

It closed 655 cases – 3 per cent down on 2012 – but reduced the number of cases outstanding at year end by 40 per cent to 222, despite the loss of two “key” members of staff whose posts had not been filled.

Complaints over the calculation of pension benefits were again the most common issue at the heart of the detailed complaint cases.

“What many complaints have in common is a failure of communication,” the ombudsman said. “While the issues involved are often very complex, trustees have a responsibility to set out the information so that the ordinary person can understand it.”

Mr Kenny expressed concern about “lost” pensions, which he said were cropping up more frequently – mostly involving people who had left a job years ago and could not now find their benefits.

He said the pensions industry – which may have thousands of “orphan schemes” (schemes that have not been wound up by companies no longer in business) – had been helpful in trying to track down lost benefits.

He also urged scheme members to take responsibility for their own pension entitlements, including keeping trustees up to date with changes of address.

Despite an “excellent result” for last year, Mr Kenny said he continued to be concerned about the length of time it takes to process a complaint.

Acknowledging pensions complaints were often complex and involved “time-consuming exchanges of information and clarification of documentation”, he said the average time to complete a complaint last year was 113 weeks.

Blaming the recruitment freeze and delays in getting responses to queries, he added: “In that regard, some elements of the public service are less than prompt in dealing with issues which we raise with them.”

Breaking down cases handled by his office, Mr Kenny said 330 were resolved without the need to go into a full investigation. His office also handed down 67 final determinations, of which 55 per cent upheld the original complaint. A further 82 cases were settled by mediation, 90 per cent of which were in favour of the complainant.


CASE STUDY: GEMMA
“Gemma”, a member of a private-sector pension scheme, was seeking early retirement due to ill health and had difficulty getting a response from the trustees of her scheme.

When the ombudsman made enquiries, he was informed the scheme was significantly underfunded. “I got the impression that the trustees were reluctant to agree early retirement because the funding level would worsen as a result.”

Following the ombudsman’s intervention with the trustees, an “amicable solution” was agreed between Gemma and the trustees without the need to make a formal decision on the complaint.


CASE STUDY: THOMAS
“Thomas”, a former employee of an agency providing services on behalf of the Health Services Executive (HSE), retired with an expectation of benefits under the Nominated Health Agencies Superannuation Scheme. He made several attempts to obtain his expected benefit from the agency, with no success.

He asked the pensions ombudsman to examine his case. It established Thomas was entitled to a benefit under the scheme and the HSE had authorised payment of the benefit to Thomas.

However, the management of the agency Thomas had worked for failed to include the payment of superannuation benefits in the annual budget and was delaying the payment of Thomas’s benefit.

The failure of the agency’s management to include benefit payments in their budget does not excuse the agency from its obligation to pay the benefits scheme members are entitled to. The ombudsman directed the agency to pay Thomas’s benefits within 30 days.

1 Opioid executive admits to ‘no morals’ ahead of prison term
2 Are there annual limits on inheritances or gifts to a child?
3 South Dublin Credit Union members urged to borrow more to ensure survival
4 American YouTubers embrace the crisp sandwich
5 Who are Ireland’s 17 billionaires?
6 Fallon & Byrne founders McHugh and Byrne exit group
7 So you want to invest in the stock market: what will it cost?
8 My father in a nursing home wants to gift me his house
9 Fianna Fáil may have just pressed the pause button on the property market
10 LinkedIn confirms plan for massive campus in Dublin city centre
Real news has value SUBSCRIBE
Save money on international transfers