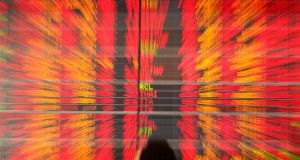 Stocks have delivered average annual returns of more than 9 per cent [since 1945], but you don’t get to collect those returns if you bail out every time markets get the jitters. Photograph: Rungroj Yongrit/EPA

Large sections of the media tend to get a little hysterical during stock market corrections, adopting a “pack up the kids” tone that aims to scare the bejaysus out of its readers.

The latest bout of market turbulence, alas, has been no different, producing headlines such as “Bearmageddon is coming”, “Dow 5,000? Yes, it could happen”, “Households just saw $1.8 trillion in wealth vanish”and “Savers and pension funds hammered in 9 days of disastrous losses”.

That last headline comes from the Daily Mail, which has been at pains to point out to readers that City slickers and spivs are not the only ones affected by market declines.

“It is a disaster for the vast majority of workers with pensions,” one piece reads. The recent Black Monday declines, it quotes one analyst as saying, “will be remembered in the nightmares of investors the world over”. Another analyst says the volatility will continue until Christmas, and this “is such dispiriting news for savers and pensioners”.

In case readers haven’t yet got the message, the Mail adds: “The ineluctable fact is that anyone who invests in shares through their pension or a tax-efficient Isa savings scheme is a loser. Little wonder that some fear the world is on the brink of a wholesale financial meltdown.”

The tabloids are not the only ones to indulge in hyperbole. A recent headline from financial website MarketWatch, part of the Dow Jones Consumer Media Group, read: “US stocks slump at the open in volatile week.” The article then revealed the S&P 500 had slipped 0.2 per cent, which brings a whole new meaning to the word “slump”.

Of course, triple-digit gains or losses are invariably more common today; after all, the Dow peaked at 18,351 earlier this year, compared with 41 in 1932. Not until the 1980s did the index spend sustained periods above the 1,000 level.

Accordingly, indices will inevitably continue to set new records in terms of points gained or lost.

When the Dow dropped more than 1,000 points in early trading on August 24th, countless media outlets noted the biggest one-day drop on record was 777 points, which occurred at the height of the financial crisis in 2008. In percentage terms, however, a 1,000-point drop equates to a decline of about 6 per cent – that’s extremely large, but nothing like the 22 per cent one-day drop that occurred on Black Monday in October 1987.

Others noted the Dow had suffered its biggest three-day drop in history. In percentage terms, however, the Dow’s three- day decline was the 18th largest since 1970.

As for the notion that recent market declines represent a “disaster for the vast majority of workers with pensions” – that’s nonsense.

Market declines are bad news for anyone planning on cashing in their pension any time soon, although in most cases such investors will have de-risked their portfolio somewhat, whittling down their equity allocations and moving into safer assets as retirement nears.

For everyone else, declines are good news. Anyone drip-feeding money into a pension fund is going to be a net buyer of stocks over the coming decades. As with any purchase, you should hope to buy at lower prices.

“Only those who will be sellers of equities in the near future should be happy at seeing stocks rise”, notes Warren Buffett. “Prospective buyers should much prefer sinking prices.”

It can feel painful, of course, to glance at your portfolio and see it has taken a pounding. However, the notion that the recent double-digit correction is the stuff of nightmares is absurd. Corrections are common: the US market has suffered 27 such episodes since 1945, and 12 bear markets (declines of at least 20 per cent).

average annual returns of more than 9 per cent during that time, but you don’t get to collect those returns if you bail out every time markets get the jitters. In fact, if you attempt to sidestep volatility you’ll likely be much the poorer for it.

Earlier this year, blogger and Ritholtz Wealth Management director of research Michael Batnick tested a strategy whereby you sell your stocks every time indices drop 5 per cent, buying back in only when stocks are 1 per cent higher than when you sold, “just to make sure that the dust has settled”. The results? Returns drop dramatically, to just 2.8 per cent a year.

In August 2011, global stocks suffered a steep sell-off. According to fund group Vanguard, during the first eight days of the month, which included two of the most volatile days since 2008, more than 98 per cent of its clients made no changes to their portfolios. In October 2008, at the very height of the global financial crisis, 96 per cent took no action.

During times of market crisis, “we are somehow misled into believing that ‘everyone’ is dumping stocks and getting out of the market”, Vanguard concluded. The reality is that those trading “are a very small subset of investors”; most people take the long-term view and sit tight.

Don’t expect to hear this message of calm too often in the coming weeks. “The financial media lives for these sorts of markets the same way the Weather Channel yearns for superstorms”, says Michael Batnick.

“Stocks became more attractive yet again today, as the Dow dropped another 2.5 per cent on heavy volume – the fourth day in a row that stocks have got cheaper,” the anchorman announces. “Tech investors fared even better, as leading companies like Microsoft lost nearly 5 per cent on the day, making them even more affordable.

“That comes on top of the good news of the past year, in which stocks have already lost 50 per cent, putting them at bargain levels not seen in years. And some prominent analysts are optimistic that prices may drop still further in the weeks and months to come.”

The newscast then cuts over to a market strategist. “My forecast is for stocks to lose another 15 per cent by June. I’m cautiously optimistic that if everything goes well, stocks could lose 25 per cent, maybe more.”

This perspective may sound peculiar, but it’s a logical one. The same cannot be said for a media message that portrays every market decline as a “disaster” for savers and investors.