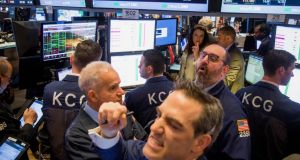 The United States bull market, now 2,612 days old, has just become the second-longest rally in history. Stocks have more than tripled since March 2009, and are now within touching distance of fresh all-time highs courtesy of a big rally over the last three months.

So why is the mood among ordinary investors one of indifference rather than exuberance?

According to a Gallup poll in April, just 52 per cent of Americans have money in the stock market, compared with 65 per cent in 2007. Ownership rates have continued to fall throughout the current bull market, so much so that they now match the lowest figure in the poll’s 19-year history.

Although equities have easily outperformed all other asset classes over the long run, just 22 per cent of Americans believe stocks to be the best long-term investment, well below property (35 per cent) and not far ahead of gold (17 per cent).

The recent market gains have done little to enthuse respondents to the latest American Association of Individual Investors poll, just a third of who describe themselves as bullish. Remarkably, readings have been below their long-term average for 59 of the last 60 weeks. Indeed, Bespoke Investment Group notes that there have been many times in recent years when indices have been near all-time highs, but bearish sentiment was nearly as marked as it was at the lows of the global financial crisis.

“That’s not supposed to happen,” says Bespoke. Investor sentiment is meant to get frothy during bull markets, but this exuberance has been conspicuously absent throughout the seven-year bull run.

Data from the Yale School of Management surveys shows that individual investors have been less bullish than institutional investors for almost all of the last 11 years, notes Bespoke.

Prior to 2005, the opposite was the case. Sentiment was especially heady during the late 1990s, of course, and it took some time for this to fade: only at the very tail end of the 2000-2002 bear market did sentiment among ordinary investors hit bearish extremes.

Until then, investors were willing to give stocks the benefit of the doubt.

In contrast, today’s investors are a jumpy bunch, with the merest hint of a correction enough to dent their tenuous faith in equities.

There’s an obvious reason for the change. “All of the lost money from the dotcom bubble and the financial crisis has permanently scarred a generation of individual investors,” says Bespoke, “and only time and a new generation will be able to change this dynamic.”

The same point was recently made by Liz Ann Sonders, chief investment strategist at Charles Schwab, who noted that in terms of net demand for stocks, pension funds and individual investors have put no new money into the equity market since the bull market began in 2009. The global financial crisis, she said, had “changed the psyche of a generation”.

Unsurprisingly, this is especially true of those who experienced the worst effects of the 2008-2009 financial crash: 93 per cent of this group, dubbed “post-crash sceptics” in an Allianz report last autumn, said the crash still “greatly impacts how they live, work and spend”.

The end result is that younger investors, in particular, are likely to remain wary of stock markets for a long time.

A 2014 UBS report suggested that young investors were likely to be the most fiscally conservative generation since the 1930s depression; only 12 per cent of millennials said they would invest found money in the stock market, while just 28 per cent saw long-term investing as a route to success.

The hangover from the global financial bust, said UBS, had left young investors with a “depression-era mindset”.

Academic evidence confirms that people’s financial conduct and attitudes are very much shaped by such events. One paper, Depression Babies: Do Macroeconomic Experiences Affect Risk Taking?, found that people who experienced difficult stock markets were less likely to take financial risk and less likely to participate in stock markets. If they did participate, they invested a lower fraction of their wealth in stocks.

Unsurprisingly, they were more pessimistic about future stock returns.

A separate study found that investors who grew up during economically difficult periods, or who entered the job market during recessionary times, were more likely to choose a value investing approach over a growth investing strategy several decades later in their lives. Another paper found that corporate executives who grew up during the 1930s depression were more likely to choose a conservative capital structure with less leverage.

Today’s investors, then, are likely to resemble the above-mentioned “depression babies”, given the extraordinary market events suffered in the noughties. The 2000-2002 bear market that followed the dotcom crash was no ordinary bear market – the S&P 500 halved, the biggest fall seen since the 1930s.

It took five years for indices to recover that lost ground, only for equities then to plunge 57 per cent during the 2008-2009 crash. Back-to-back bear markets of this magnitude are a rarity, to say the least, and the psychological scars may well last for decades, as Bespoke Investment Group suggests.

This may be even more true of investors in Ireland, given the scale of the economic bust and the collapse seen in Irish share prices, which fell by some 80 per cent.

Clearly, the after-effects of the 2008-2009 crash are going to be felt for many years to come. For one, the media’s tendency towards hyperbolic market coverage is likely to continue; that’s partly because fear sells, and partly because financial commentators who may have been too trusting in the past are wary of being labelled as cheerleaders.

There was nothing remarkable about the double-digit corrections that occurred last August and again in January-February. Corrections are part and parcel of stock-market investing, and the recent ones were essentially run-of-the-mill affairs. But much media coverage suggested otherwise, warning of “Bearmageddon” and another 2008-style crash.

Investors are likely to remain in a state of similarly excessive alert. At the market bottom in February, a UBS survey of affluent individual investors revealed that the recent volatility had “rekindled memories of the financial crisis” for 42 per cent of respondents. Almost a quarter – 23 per cent – believed it was “the start of a longer-term market decline”. Almost 90 per cent said they had increased or maintained their cash holdings since the outbreak of volatility, while fewer than one in five were willing to take on more risk for greater returns.

Such risk aversion can be a costly business – stocks have gained 15 per cent since February’s lows. More crucially, the data suggests investors with long-term horizons have little to fear from equities. Over the last 20 years the S&P 500 has recorded annualised returns of 8 per cent, or 5.7 per cent after inflation.

That’s somewhat below its historical average, but it’s a decent return, especially given that this period witnessed the two biggest bear markets since the 1930s. Poorer returns were obviously recorded in other eras, although the S&P has never suffered a 20-year period where equities were outpaced by inflation.

As for the ongoing bull market, investors “continue to have an apathetic (if not loathsome) view”, says Bespoke Investment Group. Don’t expect that to change any time soon; scarred by the global financial crisis, today’s depression babies are likely to remain sceptical of stocks for some time to come.